Read inOther Languages
This Article is From Jul 31, 2020

Two Huge Snakes Fight It Out In This Hair-Raising Video

Snake fight: Two huge rat snakes in a fight for dominance. Watch the hair-raising clip below. 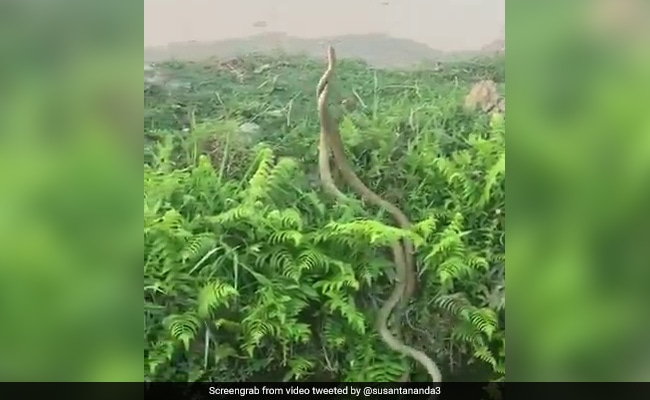 Two huge snakes were seen fighting in a video that has captured Twitter's attention since being shared this morning. The video was posted on the microblogging platform by Indian Forest Service officer Susanta Nanda, who identified the snakes as rat snakes.

The fight between the two huge serpents begins in water - they were filmed wrapping themselves around each other while swimming in a small creek of sorts. The true size of the snakes, however, becomes apparent only when they emerge out of water and take the fight to the ferns on the bank. The two massive rat snakes can be seen coiling themselves around each other in a "combat for dominance" in this hair-raising clip.

According to Mr Nanda, the clip shows two male rat snakes fighting for territory and to defend their mate. In the comments section, he also clarified that contrary to popular misconception, the video does not feature a mating ritual.

According to the National Geographic, the behaviour where two male snakes twist themselves around each other until one of them falls is known as "plaiting combat".

"Two male fighting to define their territory & defend their mate," wrote Mr Nanda while sharing the video. Take a look at it below:

Since being shared this morning, the video has collected over 2,600 views and a ton of comments.

Rat snakes are nonvenomous snakes that kill by constriction, according to Live Science. Medium to large in size, they usually hunt small rodents.