Mulga snakes, native to Australia, wrestle with each other for the right to mate. 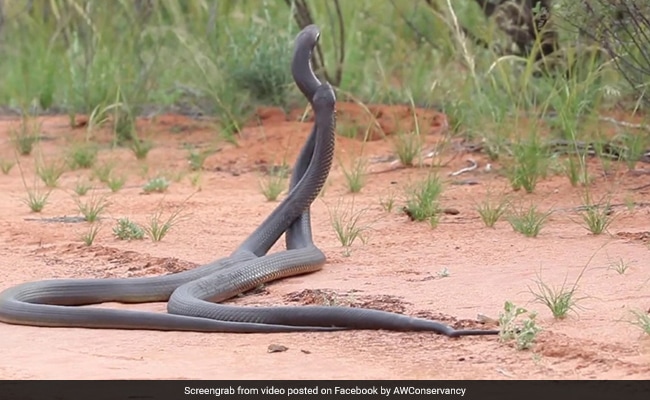 Mulga snakes engage in combat for the right to mate.

The Australian Wildlife Conservancy has shared hair-raising footage of two snakes fighting at a wildlife sanctuary. The two venomous mulga snakes were seen coiling themselves around each other and wrestling for the right to mate with a female.

According to Australian Wildlife Conservancy - a non-profit that works to conserve threatened wildlife and ecosystems in Australia - the fight took place at their Scotia Wildlife Sanctuary in the Murray-Darling basin.

Mulga snakes have the widest distribution of any snake species in Australia and are found almost throughout the continent. According to the Australian Museum, males of the species wrestle with each other for the right to mate. Male combat has been recorded in early-mid spring for this species.

Typically, the snakes entwine their bodies and attempt to push their opponent down with their raised heads - a tactic also captured in this one-minute clip.

"These mulga snakes were seen fighting for well over an hour at our Scotia Wildlife Sanctuary," Australian Wildlife Conservancy (AWC) wrote while sharing the footage.

According to AWC ecologist Tali Moyle, who recorded the footage: "Mating season starts in early spring and the males start wrestling, attempting to push each other over to prove their dominance, for the right to mate with the females. Although mulga snakes are fairly common, it's not too often you see this behaviour - this is only the second time I've seen it."

The video has been viewed nearly 2 lakh times on Facebook since being shared two days ago. It has also garnered over 300 comments.

"What incredible footage!! Thanks for sharing," wrote one Facebook user.

"My worst nightmare... the mighty mulga!" another said.