Two-Headed Snake Swallows Two Mice Simultaneously. Video Is Not For The Faint-Hearted

The condition of having two heads is known as bicephaly. 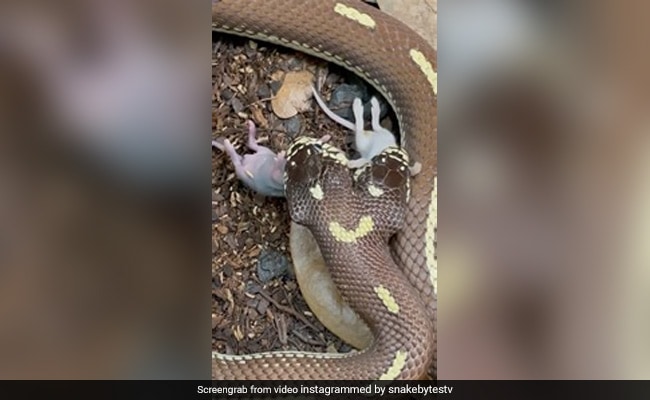 Do you get squeamish easily? Then you should probably skip watching the upcoming video. Wildlife enthusiast and popular YouTuber Brian Barczyk recently shared a clip of a two-headed snake swallowing two mice simultaneously. "Two headed Ben and Jerry eating," he wrote while sharing the clip which has, predictably enough, left a lot of people stunned and others intrigued. The video shows each head of the snake working independently to eat two mice.

Since being posted last week, the video has garnered over 2.7 lakh views and hundreds of comments. Many viewers were full of questions after watching the video, while others dropped amazed reactions.

"Do they have two digestive tracts or does it meet along the way and go into one?" asked one curious Instagram user - a query that many others also had.

"Do they have two digestive systems?" another user wondered.

"The pattern on the back of their heads looks like a smiley face," a third observed.

"How old are they? Wild that they are still alive," an Instagram user noted.

Instances of two-headed snakes, though uncommon, are not unheard of. Last year, a rare wolf snake with two fully formed heads was discovered in Odisha. Much like in this video, the wold snake, too, had two heads that worked independently of each other.

The condition of having two heads is known as bicephaly. According to Florida Fish and Wildlife Conservation Commission, bicephaly occurs "during embryo development when two monozygotic twins failed to separate, leaving the heads conjoined onto a single body."

The Commission added that two-headed snakes are unlikely to survive in the wild "as the two brains make different decisions that inhibit the ability to feed or escape from predators."