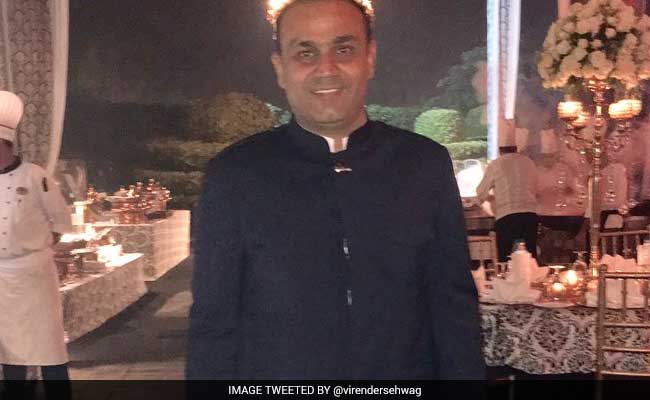 There have been quite a few pictures from Yuvraj Singh and Hazel Keech's grand wedding over the past few days. However, this one picture from last evening's reception in Delhi has all of Twitter talking. No, it does not feature the newly-weds but the groom's former teammate and current Twitter king, Virender Sehwag.

Promoted
Listen to the latest songs, only on JioSaavn.com
In a tweet shared on December 7, the cricket icon shared a solo shot of himself. What's noteworthy here is that Viru, who is exceptionally out-spoken on the social networking site, posted it sans a caption. Let's see if you can spot what everyone's tweeting about the picture.

It could take a second, but notice that accidental headgear Viru's wearing in the photo? Or was this whole thing on purpose?

Tweeple have since not stopped commenting on Viru's 'crowning glory.' The picture has received almost 8,000 'likes' on Twitter. One person even compared it to a flaming shot.

@virendersehwag your crown embedded with lights reminds me of God Indra ;)

.@virendersehwag And people say Viru is the most cool headed cricketer ever :-)

@virendersehwag what are your wearing on your head?

Uncharacteristically, there has been no reply from the cricketer on this. Should we expect fireworks? Awaiting your reply with baited breath, Viru.