As the log rolls back and forth, the turtles are seen sliding off and falling into the water. 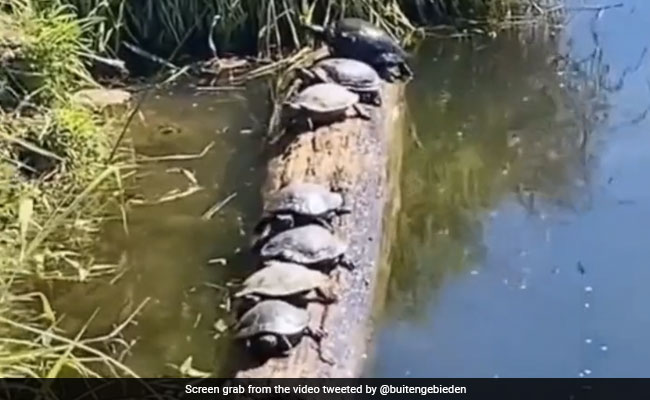 Animals have strange ways to amuse the world. Sometimes, their antics in the wild go viral on the internet, and sometimes, their games. Yes, animals also like to play games where they are seen challenging others in the flock.

Like this group of turtles, which are trying to balance on an unstable log in a river. The video of their little game has been posted by Buitengebieden on Twitter and has garnered 5.4 million views.

As the log rolls back and forth, the turtles are seen sliding off and falling into the water. The log moves as if it has been specifically installed for the game.

The 30-second video begins with seven turtles on the log, and as it ends, only three remain. However, no winner could be decided as the video ends before that.

The video has been liked by more than three lakh Twitter users who were amused to see the efforts being put in by the turtles.

“As the log seem so imbalanced, makes me wonder how the turtles got on the log in the first place,” tweeted a user.

Some users posted other videos of animals having a great time - like an alligator enjoying a ride natural water slide and a cat riding a tortoise.

There are also videos of people organising such games and videos from famous television gameshow Takeshi's Castle.

Last week, a video of a bear cub breaking into dance delighted the internet.

The excited bear cub also hopped around after standing on its hind legs. The 13-second clip shows him dancing like nobody's watching.