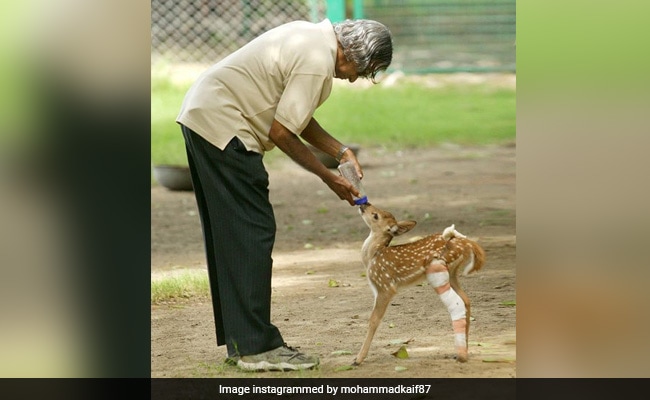 India is remembering former president and visionary scientist Dr APJ Abdul Kalam on his 88th birth anniversary. Fondly called the "Missile Man" of India, Dr Kalam was an aerospace scientist credited for India's civilian space programme and military missile systems. He served as the President of India between 2002 to 2007, and was widely referred to as the people's President. Dr Kalam, however, identified himself first as a teacher and then anything else. In his honour, his birthday is celebrated as World Students' Day every year.

Today, on his 88th birth anniversary, tributes have poured in for Dr APJ Abdul Kalam on social media.

Former cricketer Mohammad Kaif shared a lovely picture of Dr Kalam where he is seen bottle-feeding a deer. "Tributes to an absolute inspiration and a role model, Dr #APJAbdulKalam on his birth anniversary," wrote Mohammad Kaif.

Tributes to an absolute inspiration and a role model, Dr #APJAbdulKalam on his birth anniversary. In awe of his greatness, what a man !

A big salute to the big man on his birth anniversary. Thank you for the many lessons given to us...🙏🏽 pic.twitter.com/dW2xj7tjHV

Former cricketer Virender Sehwag hailed Dr APJ Kalam as "one of the greatest Indians" on Twitter.

Humble tributes to Dr #APJAbdulKalam ji on his birth anniversary ,one of the greatest Indians to have walked the planet . Kalam Sahab ko Salaam 🙏🏻 pic.twitter.com/o2d2gyU5kf

We should not give up and we should not allow the problem to defeat us. - Dr. APJ Abdul Kalam. (Due credits to image owner) #APJAbdulKalam#Missilemanpic.twitter.com/Y9aMJyjAgb

Remembering the Missile Man of India, Dr #APJAbdulKalam on his birth anniversary today. On this day, head to Dr Kalam Smriti International Science and Space Museum in Trivandrum, a museum dedicated solely to his memory.https://t.co/qujjs5nYT3

Dr Avul Pakir Jainulabdeen Abdul Kalam was born on October 15, 1931, at Rameswaram in Tamil Nadu. He was awarded the Bharat Ratna - the country's highest civilian award - in 1997.