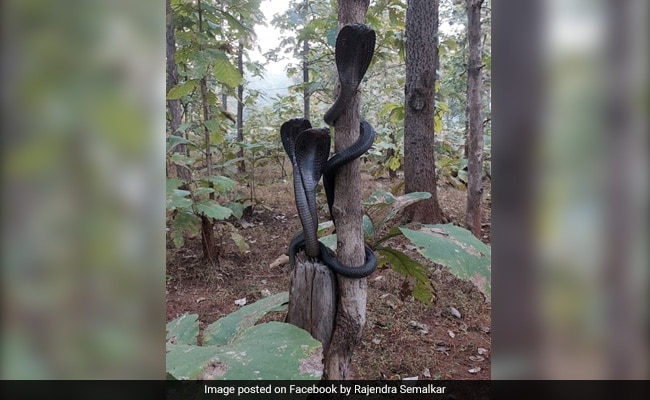 The forests of India are full of diverse wonders. There's no dearth of surprises in these territories, as India is home to a range of flora and fauna. Often, we come across wonderful sights that take our breath away. Now, a photo of three cobras in Maharashtra has gone viral on social media.

The photos first appeared on a Facebook group named Indian Wildlife yesterday. They were reportedly clicked after the snakes were rescued and released into the forest. A user named Rajendra Semalkar posted a series of photos which show three cobras coiled around a tree trunk in Harisal forest in Amravati district. “Magical Melghat, spotted 3 cobras in Harisal forest!” wrote Mr Semalkar. The post has been liked by over 4,700 users.

One of the photos was also shared on Twitter by IFS officer Susanta Nanda. In the photo we see three black cobras raising their hood while wrapped around a tree trunk. Mr Nanda attributed the photo to Mr Semalkar, and added in the caption, “Blessings... When three cobras bless you at the same time.”

Blessings...
When three cobras bless you at the same time.
????:Rajendra Semalkar. pic.twitter.com/EZCQTumTwT

At the time of writing, over 2,200 people had like Mr Nanda's post. Reacting to the post, one user said, “Khoobsurati magar door se - paas me sirf paseena ayega darr se (They are beautiful but only from a distance. From up close, it would only lead to fear-induced sweating).”

Some users were scared by the sight. One of them wrote, “I would have disappeared from that place the next nanosecond.”

I would have disappeared from that place the next nanosecond !????

But there were others who couldn't help but adore the sight. One user wrote, “Wow! They are simply beautiful yet intense and fierce, almost divine!”

Wow! They are simply beautiful yet intense and fierce, almost divine!

Another user got curious and asked, "Do they live in groups?"

Do they live in groups? Just curious.

There was also a user who questioned the authenticity of the photo and asked, "This has got to be staged, no?"

This has got to be staged, no?

One user thanked Mr Nanda and said that by following forest officers on Twitter, users got opportunities to “access or view pictures” such as these, and know about places where the “common man can hardly travel in his lifetime”.

Following forest officers on Twitter gives us unique opportunity to access or view pictures and places that common man can hardly travel in his life time. Thanks for sharing such pictures

Here are a few more reactions that express emotions ranging from horror to astonishment:

Om Namah Shivay???? (I am shivering seeing the image, don't even want to imagine what will happen during the live encounter)

I don't want that "blessing" sir, never ever ever.

When confronted, not sure how many of us will count this as a blessing ???? #jaibholenath

The sight of one cobra is a once-in-a-lifetime opportunity for many. To have seen three at once, some noise had to be made on social media.