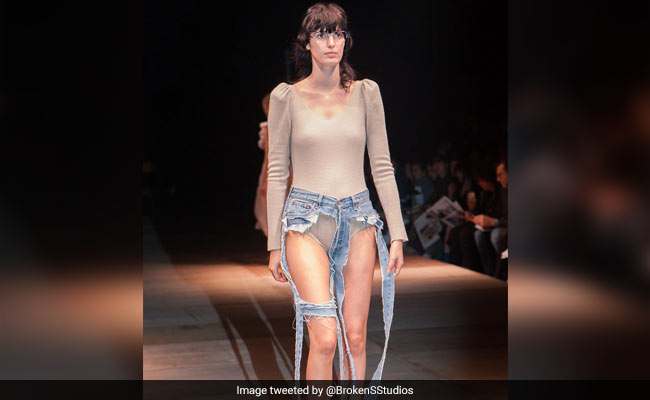 Thong jeans are the latest in a line of bizarre denim trends.

We've seen ripped jeans and distressed denims, jeans with massive cutouts and pants with plastic knees. But this one pair takes the cake. The Internet was recently left astonished after designer Thibaut debuted a pair of barely-there thong jeans at the Amazon Fashion Week in Tokyo, Japan. The daring pair of denims, with everything but the seams cut away, left the Internet collectively shaking its head.

"Thong jeans should not be a thing. Just no," writes one exasperated user on Twitter. "Why even bother wearing jeans?" wonders another.

Here is what people are saying about the bizarre new jeans:

My friends: "It's going to be chill, just wear something super casual."
Me: *shows up in my thong jeans* https://t.co/AL9EhXa8SD

Why even bother wearing jeans? #thongjeanspic.twitter.com/HKC8pHikXk

They were recommended to me by my doctor for my vitamin D deficiency.

Sees Headline "Thong Jeans cut out everything but the seams"

A piece of duct-tape would do the same thing in much lesser price. To feel better, we can call it "thong jeans - skin fit". #thongjeanspic.twitter.com/SDEWVlCiTy

"Meanwhile, throwing your jeans under a lawn mower seems to be the new fashion. Thong Jeans." https://t.co/vb2AFSlw1c

According to the Daily Mail, these jeans are not available in stores yet (in case you actually wanted to buy a pair).

Promoted
Listen to the latest songs, only on JioSaavn.com
While this may be the 'edgiest' trend of them all, it is certainly not the first time that designers have tried to experiment with a good 'ol pair of denims.

A few months ago, Topshop brought out clear plastic jeans

Let's not forget these a few months ago - Topshop brought out clear plastic 'jeans'! pic.twitter.com/ZgUIW38SKn

ASOS was ridiculed for their jeans ripped at the bum, and Nordstrom for denims with fake mud on them.Click for more trending news