Attending meetings virtually? You may find this relatable. 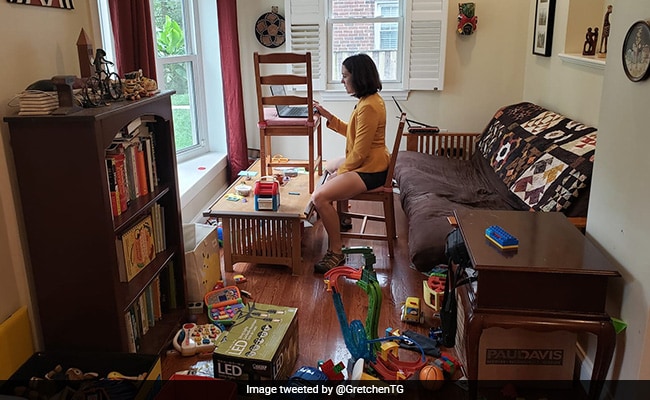 The coronavirus pandemic has forced millions of people across the world to work from their homes. Over the last few months, several working professionals have opened up about the struggles of working from home too. Many people have also spoken of the huge gap between the reality of their homes and what their colleagues see on their own screens. Now, one scientist has gone viral online for her hilariously honest post on the realities of working from home - and if you have been attending meetings virtually, chances are that you will find her post very relatable.

Gretchen Goldman, a scientist and PhD environmental engineer, recently appeared on a CNN segment to talk about the future of USA's federal climate change leadership. Professionally attired in what appears to be a mustard suit set, she appeared for the broadcast via a video link. To CNN viewers, Ms Goldman appeared to be sitting in her drawing room, furnished with elegant sofas and family pictures in the background.

What the camera did not capture, however, were the toys scattered on the floor and the shorts she wore beneath her blazer. It also did not reveal the trick Ms Goldman used to get the perfect camera angle - placing her laptop on a chair kept on top of a table.

Ms Goldman shared two pics on Twitter. While one shows her the way she appeared on CNN, the other captures the chaos of working from home. "Just so I'm being honest. #SciMomJourneys," she wrote.

Just so I'm being honest. #SciMomJourneyspic.twitter.com/4yZMKtVxwP

While many Twitter users dropped amused comments, some even shared tips to appear professional while attending virtual meetings.

"For future reference, use your ironing board to rest your laptop on - you can adjust to the right height and it's much less precarious than a chair on a coffee table!" one Twitter user advised her.

"This unfiltered glimpse into your reality is so important for the mental health of working moms in a pandemic. If they only see the left image it can be very disheartening. The right image allows them to have a knowing laugh and cut themselves some slack," another remarked.

In April, businessman Anand Mahindra had shared a meme on the reality of working from home, along with a confession.