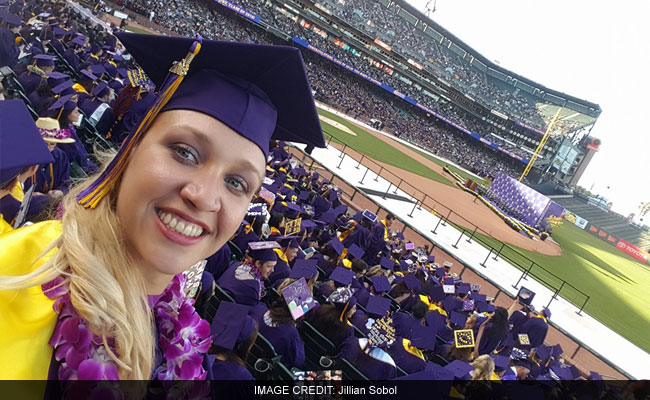 Jillian Sobol was placed in a box as an infant and left in a San Francisco State University dormitory laundry room by her mother in November 1984.

The baby girl was born in November 1984.

She was placed in a box and left in a San Francisco State University dormitory laundry room by her mother, who was a student at the school, according to the San Francisco Chronicle.

In that laundry room, she was discovered by a student named Patrick, the newspaper reported, then helped by a 21-year-old named Esther, who cared for her in the critical moments before paramedics arrived.

Eventually, she was adopted by Sam and Helene Sobol, who she says gave her a warm and loving home.

That girl who was left in the campus laundry room is grown now. Her name is Jillian Sobol. And she recently graduated from the school where she born: San Francisco State University.

What's more: Esther Raiger, the former student who had helped her on the day of her birth, was there to help celebrate her big day, according to the new college grad, who spoke with The Washington Post on Sunday. It was a real crew, with Sobol's biological father present as well. And the Sobols, of course.

"And every time I saw them, I just tried not to cry," Jillian Sobol, 31, later told The Post, "because they mean the world to me."

Sobol's life story was detailed by the Chronicle, which reported that she didn't even tell the university about her personal background until earlier this year. That's when she penned a letter to the university's president, telling him about her connection to the institution.

"It helped close the circle," Sobol told The Post. "And it helped me emotionally get out the words to the people that needed to hear it."

You can check out the Chronicle for a more complete version of Sobol's history, but here are the basics, according to the newspaper: Patrick Coughlan noticed the newborn as he was loading a dryer in a dorm that has since been demolished. Coughlan, who died a few years ago, asked Raiger, who was also in the laundry area that November morning, whether she realized a baby was in a box in the room.

And Raiger sprang into action, according to the Chronicle, which reported:

The nursing student had just aced her neonatal ABCs: airways, breathing and circulation. She swept her finger through the baby's mouth to make sure her airway was clear. She unwrapped the dirty towels and grew concerned by the baby's bluish color. She knew the infant was at risk of infection from the crude way the umbilical cord had been severed, and she recognized the potential for hypothermia.

The newborn was taken to a hospital and was later adopted by the Sobols, who had previously adopted a young boy.

When Jillian Sobol was a teenager, she learned the circumstances of her birth. A few years later, she reached out to Raiger, according to the Chronicle.

"I wrote her a letter, just saying, 'I know we've never met, but you've been a very big part of my life and I hope to meet you someday,' " Sobol told The Post. "And she was kind, and sent me a letter after. It was very exciting waiting for the mailman to show up every day: Will she write me? Will she write me?"

The pair reconnected, a reunion that was followed by a meeting with Sobol's biological father and his parents, the newspaper reported.

Sobol also has also taken steps to reconnect with her biological mother, although there have been a few slip-ups. Sobol said she wrote her a letter, which was followed by a Facebook message from her birth mother. The problem, however, was that Sobol didn't see the message until recently.

"There's a lot of optimism for the future," Sobol said, "but for right now, it's about graduation."

To be clear on one point: Sobol didn't attend San Francisco State because she was born there. It just worked out that way; she wanted to study hospitality and tourism management at the school, which also happened to be the place of her birth.

But, still, can you imagine what this full-circle journey must have felt like upon her graduation this month?

"It's been a bumpy road, that's for sure," Sobol told The Post. "Life always has its ups and downs. It was very emotional taking it all in. I felt nothing but love and joy -- not only for myself, but, just, the graduation was at AT&T Park, which is the baseball field here. And being in a stadium filled with other fellow graduates and [students who had earned] master's degrees and PhDs, it was very special and moving."

(This story has not been edited by NDTV staff and is auto-generated from a syndicated feed.)
Comments
Jillian SobolSan Francisco State UniversityBirth to graduation

There's A Huge Python Hiding In This Pic. Can You Find It?