"God grant me the serenity not to comment on the shoes," tweeted a journalist after pictures of US First Lady Melania Trump wearing sky-high stilettos while heading to storm-hit Texas went viral. 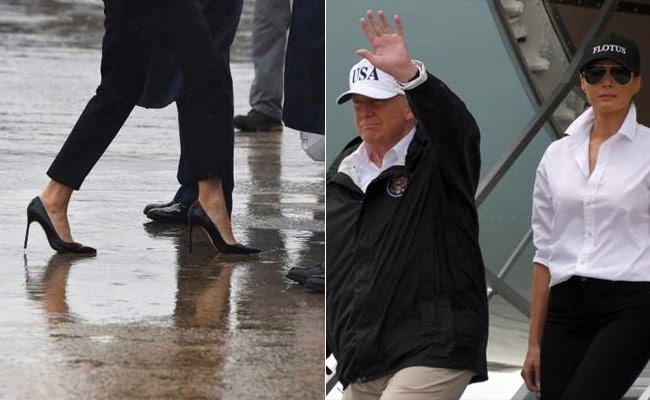 What's fashion got to do with it? A lot if you're First Lady of the United States as Melania Trump found out on Tuesday. Ms Trump was photographed walking across the White House lawn in an all-black ensemble, an army green bomber jacket, aviator sunglasses...and sky-high stilettos. The high heels - reportedly Manolo Blahniks with five-inch stiletto heels - quickly became the subject of much debate on Twitter. The hashtag #ShoeGate began trending on the microblogging site, with some seeing the shoes as an impractical and insensitive choice for visiting storm-hit Texas, and others angrily stating that the high heels must not detract from the ongoing natural disaster.

"Why, oh why, can't this administration get anything, even a pair of shoes, right?" asked Vogue. "The emblematic first image of the first lady heading off to visit a hurricane in heels...instead became another symbol of a White House that can often seem out of touch," noted Politico

And here we have Melania Trump modeling what NOT to wear to a hurricane: 5-inch stilettos.

How out of touch can you be? pic.twitter.com/tZR8o3dYxY

God grant me the serenity not to comment on the shoes.

"In Mrs. Trump's job, as in her husband's, details matter. Even shoes. Put your best foot forward, and all that," noted New York Times' chief fashion critic.

On Twitter, many jumped to the First Lady's defence. "Hey, everyone, please shut up about Melania Trump's shoes," begged Mashable.

I gotta believe Melania is going to change out of the stilettos on the plane. Those were just her "walking to Air Force One" shoes.

There are many reasons the Trump administration concerns me...Melania Trump's shoes aren't one of them. Not today kids.

Others reacted with dry humour:

Melania headed to a disaster zone in stilettos is my Halloween costume. pic.twitter.com/BWhUSKWVQ8

MELANIA TRUMP BE LIKE: "Theres only so much I'm willing 2 do for this country." #BlackTwitter#ShoeGasm#ShoeGate#BlackTwitter#HarveyFloodpic.twitter.com/4ADbd70Z7W

Following the criticism, the White House was forced to issue a statement.

from @FLOTUS comms dir: "It's sad that we have an active and ongoing natural disaster in Texas, and people are worried about her shoes."

A @FLOTUS spokeswoman tells @hausofcait that yes, Melania brought a change of shoes for Texas https://t.co/qMKcwbCWBp

Update for everyone who is obsessed with this: Melania Trump is now in tennis shoes. pic.twitter.com/6nwboiEZfk

if i may, ahem, I told you so. @FLOTUS#stansmithspic.twitter.com/wwACuJZmbj

She also wore a black baseball cap that read "FLOTUS," or the abbreviation for First Lady of the United States.

The US President and First Lady spent time in Corpus Christi and Austin during their trip to Texas in the wake of Hurricane Harvey, which made landfall during the weekend as a monster Category Four hurricane and later weakened to a tropical storm. The rain has led to severe flooding in parts of the state.