Tail-Spin: 5 Squirrel Siblings Found Themselves A Bit Tied Up... 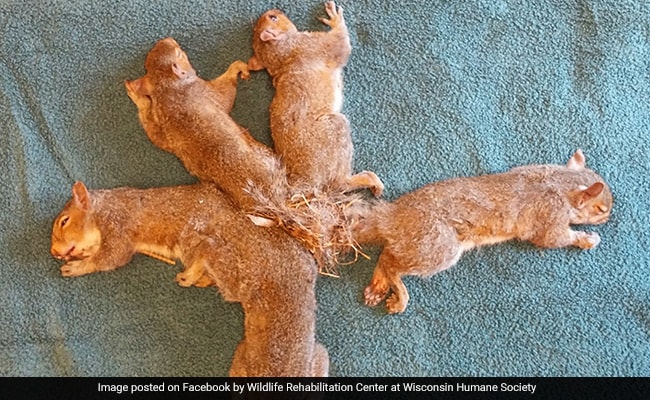 Rescuers put all the little squirrels under anesthesia in order to help them.

A bunch of squirrel siblings in Wisconsin, US, found themselves in a sticky situation - their tails got entangled with each other's and pieces that made up their nest. Luckily they were found and freed. A post on this special rescue has received over 500 shares since being shared on September 15.

The post shared by Wildlife Rehabilitation Center at Wisconsin Humane Society on Facebook shows a picture of the five squirrels all tangled up along with images that show them freed from each other. According to the post, if they were not freed in time, they could have lost their tails which are important for their balance and warmth.

The squirrels were found by a "caring finder" who promptly called for help. The team first put all the little squirrels under anesthesia in order to help them. "You can imagine how wiggly and unruly (and nippy!) this frightened, distressed ball of squirrelly energy was..." says the post.

The team worked carefully to free the squirrels ensuring they don't snip anyone's tails. "It was impossible to tell whose tail was whose, and we were increasingly concerned because all of them had suffered from varying degrees of tissue damage to their tails caused by circulatory impairment," says the post.

It took 20 minutes for the squirrels to be freed. They will continue to be under observation for a few days.

"Thanks to the person who made the effort to call. And thanks to you for taking such great care of them. Hoping all will be OK," says one Facebook user. "I'm so glad that they will all be fine," says another.