The fruit was left behind as a prank but the art show's curators decided to keep it, saying it reflected the 'playful' spirit of the artist's display. 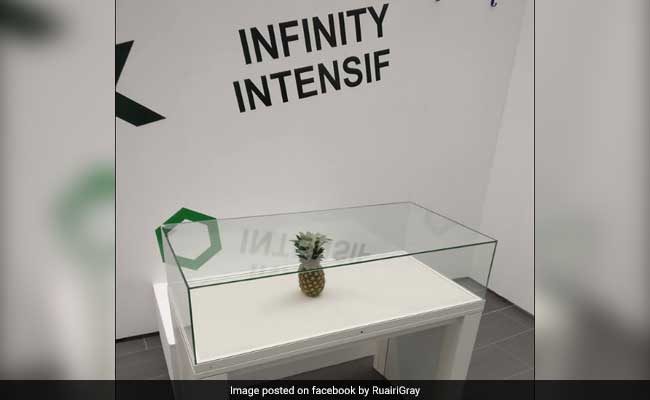 In Scotland, two students somehow pranked people into believing a pineapple was art

New Delhi: "What is art?" That's a question people have pondered and debated for years. But for some people at an art exhibit in Scotland, art was a humble pineapple. As a prank, two students placed the fruit on an empty table at an art show at Robert Gordon University in Aberdeen, Scotland. Imagine their shock when they returned four days later to find that the fruit had become part of the exhibition. It was even placed inside a glass display case.

So last week we placed a pineapple next to an art display and come in today and RGU have moved it into a glass display case. Amazing. pic.twitter.com/sMzTUlapDQ

"I saw an empty art display stand and decided to see how long it would stay there for or if people would believe it was art," Ruairi Gray tells MailOnline.

"I came in later and it had been put in a glass case - it's the funniest thing that has happened all year."

It's unclear who decided to elevate the pineapple to modern art.

"We were moving the exhibition, and came back after 10 minutes and it was in this glass case," Natalie Kerr, an official who helped put together the art show tells the Press & Journal.

"It's a bit of a mystery - the glass is pretty heavy and would need two or three people to move it, we have no idea who did it. But it's still there now, we decided to keep it because it's keeping with the playful spirit of this commission."

The Internet is unanimously impressed Mr Gray and his partner-in-crime Lloyd Jack pulled off this master prank. Some even called them art "geniuses."

@LloydJack16 You are a genius! That's modern art!

@LloydJack16 What a perfect example of how ridiculous the art gallery world has become.

As for Mr Ruairi, who is in his final year studying business information technology, well, he's now hoping for an honorary art degree.

"If anyone wants to buy the masterpiece I am now accepting offers," he cheekily tells Mail Online.

Asked to explain the significance of the unexpected masterpiece, he says, "As the pineapple decayed over time, it represents the inevitable breakdown of all life."

So while the fruit only cost them one British pound or roughly 80 rupees, there's no telling what price the art piece could now fetch.

Promoted
Listen to the latest songs, only on JioSaavn.com
Let the bidding wars begin.