The leopard is seen charging at the dogs. 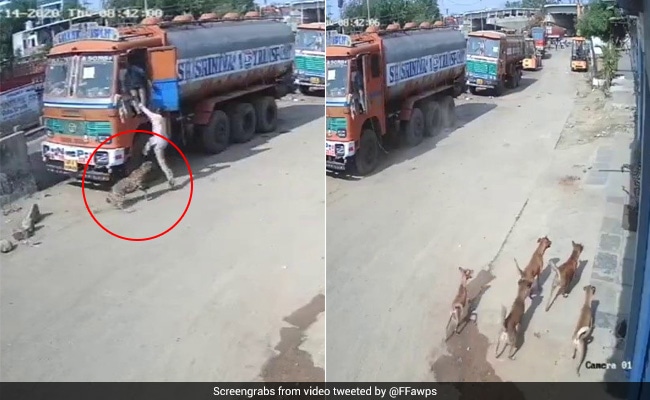 A leopard attacks a man in Hyderabad.

CCTV footage of a leopard in Hyderabad pouncing on a man has left viewers horrified. In the dramatic footage captured in Telangana's capital city, the big cat was seen pouncing on a man before being cornered by a pack of stray dogs.

The video, which has gone viral on social media, shows the leopard chasing two men. One of them manages to clamber onto a truck, away from the big cat's reach. While the other man attempts to follow him into the truck, the leopard pounces and grabs hold of his trousers in spine-chilling visuals. Luckily, the man is able to shake off the leopard and climb onto the parked lorry.

A pack of stray dogs then arrives at the scene to corner the big cat. The leopard can be seen trying to leap over a wall as the dogs, barking furiously, surround it. It does manage to drive the canines away by charging at them before escaping from the scene.

The incident occurred on Thursday morning.

Take a look at the hair-raising video below:

The video has been widely shared on social media, collecting thousands of views and a ton of horrified comments.

According to the Telangana-based Forests and Wildlife Protection Society, sniffer dogs traced the leopard to a pond near Hyderabad's Agricultural University, but the big cat remains at large.

After 30 hours of operation,Sniffer Dog traces the Leopard movement to a Pond nearby Agricultural University. Pug marks found too. In pic FD with Dog Squad(15/05/2020 at 16:30 Hrs) PC: @FFawpspic.twitter.com/MmtBxSZlXt

Ever since the imposition of nationwide lockdown, several instances of wild animals in urban areas have emerged online. Since the lockdown came into force, wild animals, including leopards, tigers and elephants, have been spotted in various residential and commercial neighbourhoods across India.