A group of South African fishermen landed an absolute beast of a big blue marlin, which is the second-largest ever caught in the Atlantic. 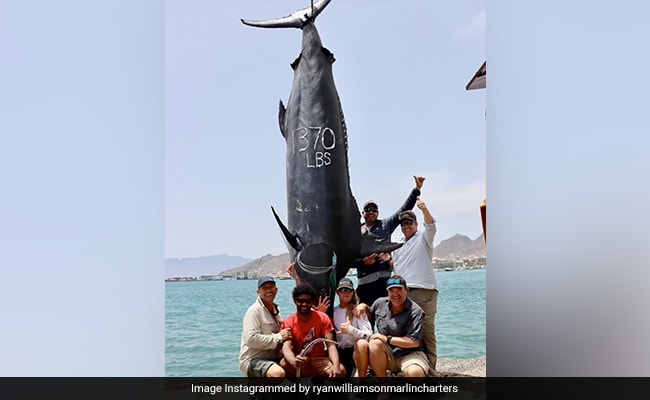 A group of South African fishermen recently reeled in one of the biggest blue marlins ever caught in the Atlantic Ocean.

According to DailyStar, three friends were fishing aboard the 37-foot Bertram charter boat ‘Smoker' with renowned Capt. Ryan “Roo” Williamson. The crew was trolling off Africa's central-west coast near Mindelo, Cape Verde, when they landed an absolute beast of a big blue marlin, which is the second-largest ever caught in the Atlantic. The humongous fish weighed 1,370 pounds (nearly 621 Kg) and measured twice the length of the men at 12 feet.

As per the media outlet, the men “teased” the big blue marlin up from the depths. Once the beast was wrangled, the men fought the fish for around 30 minutes, using an 80-pound trolling reel with a 130-pound test line, before finally being able to get the fish up on the boat.

The crew then had the marlin safely stowed on deck. The fish was placed on a digital scale, where it officially weighed in at 1,370 pounds. It measured 12.6 feet in length with a 6.6-foot girth. The fish's tail fin alone was nearly three feet across.

While the fish was huge, it was however not the biggest ever caught in the waters. According to DailyStar, the blue marlin was 32 pounds lighter than the International Game Fish Association (IGFA) All-Tackle World Record holder, which was the 1,402-pound specimen of fish caught in Brazil in 1992.

Meanwhile, as per OutdoorLife, Portugal has produced at least two Atlantic blues weighing in the 1,100-pound class, with the last one taken in 1993. A 1,305 pounder was also caught in 2015 off Ascencion Island by Jada Van Mols Holt, and that fish is still the IGFA women's 130-pound-class world record.