The snowy owl became an instant celebrity on social media 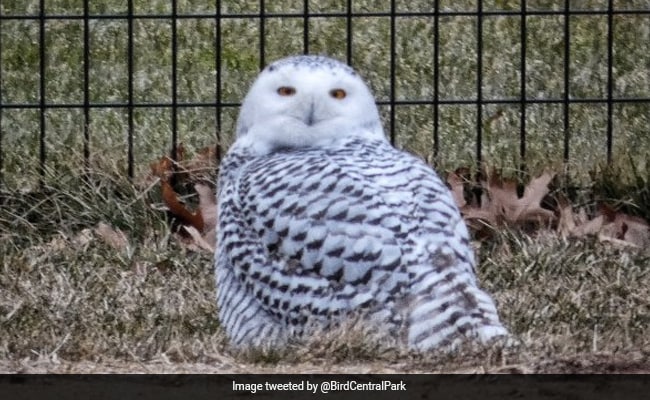 A snowy owl made an extremely rare appearance at New York's Central Park.

New Yorkers were in for an extremely rare sight on Wednesday - one that experts say hasn't been seen in over a century. Bird watchers and wildlife enthusiasts flocked to New York City's Central Park to get a glimpse of a beautiful snowy owl earlier this week.

This is the first time that a snowy owl has been spotted in Central Park in 130 years, according to The New York Times. Paul Sweet, the collection manager of the Department of Ornithology at the American Museum of Natural History, said that the last recorded sighting of a snowy owl in Central Park dates back to 1890.

I've been asked by a few people about the historic record of Snowy Owl in Central Park. The only one I can find is mid-December 1890 by an L. S. Foster. Published in Proceedings of Linnaean Society of New York, no. 3. 1891, 6. @LinnaeanNY

The bird became an instant celebrity on social media, where its appearance created a huge buzz among bird watchers. Several people gathered at Central Park on Wednesday morning to watch the large white owl as it mingled with other birds.

The SNOWY OWL of the Central Park North Meadow was not much bothered by the crows that gathered around it earlier and that have now returned. People are staying behind distant fences and being quiet and respectful. pic.twitter.com/BKjGPRiKCZ

Social media was quickly flooded with pics of the snowy owl taken by excited bird watchers. Some called it a historic sighting.

Another action shot I took of the #SnowyOwl and the #Hawk from yesterday. Fun day! @BirdCentralPark@ABA#furloughedbirder#birding#birdingnycpic.twitter.com/hQDwjFbynb

It was truly wonderful to get the opportunity to see the historic rare appearance of the Snowy Owl in Central Park in NYC even for a moment. (1/27/2021) #NaturePhotography#SnowyOwl#birdcp#birdphotography#wildlifepic.twitter.com/PGOt97Y6ML

Just incredible to see a Snowy owl in Central Park yesterday! It's only the second time one has been recorded in the park, the first time being in 1890! Thanks to those that reported the sighting so that so many were able to see this spectacular bird! #birdcp#centralparkbirdspic.twitter.com/ywESRToY8M

Snowy owls are native to the Arctic tundra and migrate south during the winter. They are more often spotted in Long Island or at beaches, according to CBS New York.

As news of the Central Park appearance spread, authorities urged people to be cautious while trying to get a glimpse of the 'celebirdy'.

"Snowy owls prefer a lot of personal space and are best viewed through scopes or binoculars. Please keep your distance so everyone can enjoy and share this magic moment," the New York City Department of Parks & Recreation tweeted.

The Linnaean Society of New York also shared guidelines encouraging birds watchers to keep a respectful distance from the owl, remain quiet and not shine flashlights at it.