"Snack Time": Panda Woken Up By Zookeeper In Adorable Video

A video is going viral on social media where a zookeeper is seen waking up a panda sleeping on a pile of wood. 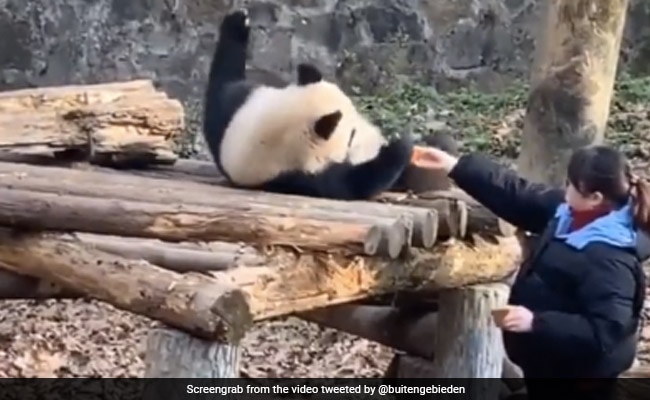 The panda immediately grabbed the carrot after waking up.

Nothing comes close to watching wild animals play and enjoy in their natural habitat. Such a video is going viral on social media where a zookeeper is seen waking up a panda sleeping on a pile of wood.

The video, shared by Buitengebieden on Twitter on Wednesday, has been captioned: “Wake up! Snack time.”

It shows a zookeeper poking the sleeping panda with a carrot in her hand. As the furry animal turns around, she hands over the carrot and a biscuit.

Pandas are loved because of their clumsiness and adorable behaviour. Users have left heartfelt comments on the post.

“Must be reincarnated as a panda,” a user wrote. “Yup that's us when I wake you to feed you,” a second user commented.

Videos of pandas are frequently shared on social media, which show them climbing trees, strolling around and rolling on the ground.

These bear-like mammals can be found in bamboo forests in central China's mountains. Pandas have a fascinating appearance thanks to their stunning black and white coat, which is paired with a bulky body and round face.

According to the IUCN Red List of Threatened Species, there are just about 1,900 pandas left in the wild.