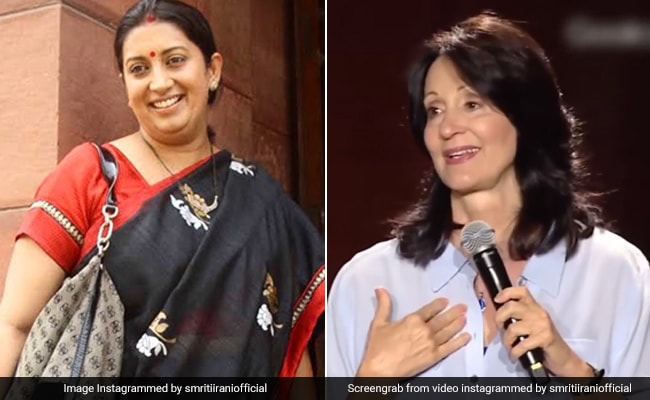 Smriti Irani shared a motivational video on Instagram this morning.

In the video, Ms Buckley recounts an incident that taught her not to judge a book by its cover. She talks about meeting a woman named Ruth, whose paralysis had her confined to a wheelchair.

"She's a quadriplegic," says Kathy Buckley. "She can't move, she can't walk, she can't talk... In five seconds or less, I had this woman pegged for death."

She then explains how her opinion of Ruth changes gradually when she learns that Ruth uses her eyes to communicate, is happily married, and has written books with the help of technology.

"With today's technology, she too had a computer. It's called a wood board," says Ms Buckley, explaining how Ruth wrote books by blinking her eyes while being hooked to the computer.

"That night, Ruth received an award. She wrote two top-selling books with the blink of an eye," reveals Ms Buckley, holding her story up as an example of why one shouldn't judge others.

"The moral of the story is please, don't pass judgement upon anyone you would not want passed upon youself."

Smriti Irani shared the video on Instagram this morning with the message: "Now that you are capable, enable others".

Since being shared online, the video has been viewed over 28,000 times. It has also received a ton of comments.

Ms Buckley's story seems to be referring to Ruth Sienkiewicz-Mercer, an American civil rights activist and writer who fought for the rights of people with special abilities.

"Hold Your Loved Ones Close": Tina Ambani On International Day Of Families