Smile, You're on Camera: Pet Boa Constrictor Photographed Sliding Down a Wire 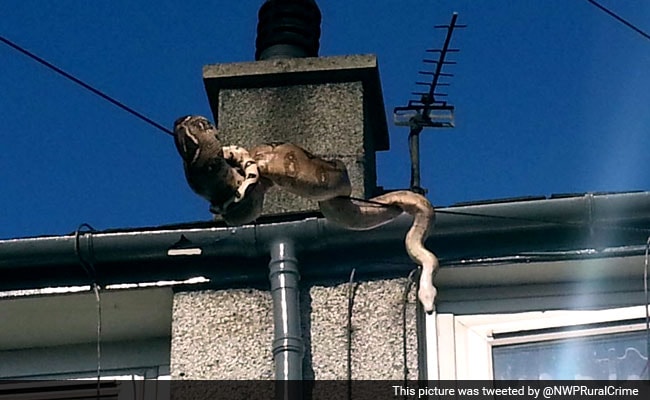 In a tweet, Rob Taylor shared a picture of a constrictor pet who had escaped from its tank.

Believe it or not, there are a few people around the world who keep unconventional pets at home. And sometimes those 'pets' run out into the open and scare the daylights out of those who a) don't really care about pets or b) have those fluffy, conventional beings at home who could be easily eaten by said pets.

Consider for example a boa constrictor, which is a large-bodied snake that can reach up to 13 feet in length and 45 kilograms in weight. Now even though boas are nonpoisonous, according to National Geographic, finding one hanging on a wire above your house can be terrifying experience, even if it 'tame'.

In a tweet, Rob Taylor who works for the North Wales Police Rural Crime Team shared a picture of a constrictor pet who had escaped from its tank and made a bid to escape. The picture was captured a year ago in Anglesey.

Impressive picture of a snake making its escape from its tank at a house on Anglesey last year. Make them secure. pic.twitter.com/x50BSAYrR5

In a following tweet he explained how the snake slithered to another house but was eventually recovered by its owner.

It made it across to the next house but was later recovered coming down the outside of the drain pipe. #scarypic.twitter.com/3NjsFDFg3c

"It's a timely reminder that people keep these sorts of animals. They are kept legally but they can be dangerous and they need to be kept under proper conditions," he told The Guardian.

We agree, Sir. No one would want to have that hanging over them.