The Jewel Changi Airport also has gardens growing over four storeys, more than 280 retail and food outlets, a hotel and a cinema. 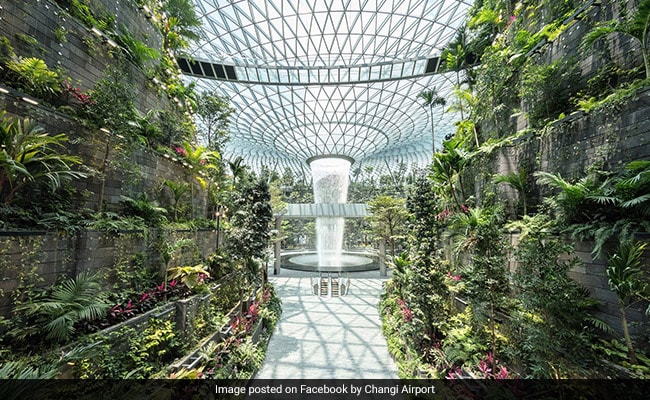 The Jewel Changi Airport is home to the world's tallest indoor waterfall.

Singapore's Changi Airport has long been regarded as one of the best airports in the world. On Wednesday, April 17, with the inauguration of its highly-anticipated 'Jewel' centre, that status will only be reinforced further. Four years in the making, the magnificent Jewel centre links to three of the airport's terminals and is spread over 1.4 million square feet.

The doughnut-shaped, glass and steel structure of the Jewel Changi Airport has gardens growing over four storeys, more than 280 retail and food outlets, a hotel and a cinema. Its most awe-inspiring feature, however, is its centerpiece:  the world's tallest indoor waterfall.

The 40-metre (approximately 130-feet) indoor waterfall cascading through a steel and glass dome sits amidst a lush forest. The massive waterfall, known as the "rain vortex", is already expected to become one of the most-Instagrammed spots in the world.

According to CNN, Jewel Changi's 'Shiseido Forest Valley' is a four-storey garden filled with walking trails set amid more than 235,000 square feet of landscaping that surround the waterfall. Visitors can walk on cobblestoned walking trails to enjoy one of the largest indoor collection of plants in Singapore, says Changi Airport on its official Facebook page.

"Rainwater is collected and it becomes a part of the Vortex as well," Jayson Goh, managing director for airport operations management of Changi Airport Group, tells CNN.

"We can actually control the volume of flow. Below the Vortex we have tanks to collect the rainwater so that we can recycle it. When there's an excess of rainwater, it can be used for irrigation of the plants in the Forest Valley."

Other stunning pictures of the airport that have gone viral on social media show its facade, made up of more than 9,000 glass panels.

The Jewel Changi Airport, besides being an attraction for tourists, is also expected to become a destination in its own right for local residents.

What do you think of Singapore's Jewel Changi Airport? Let us know using the comments section below.