"Seeing a deer that was being cut up next to me really made me worried about the sanitation of the salon." 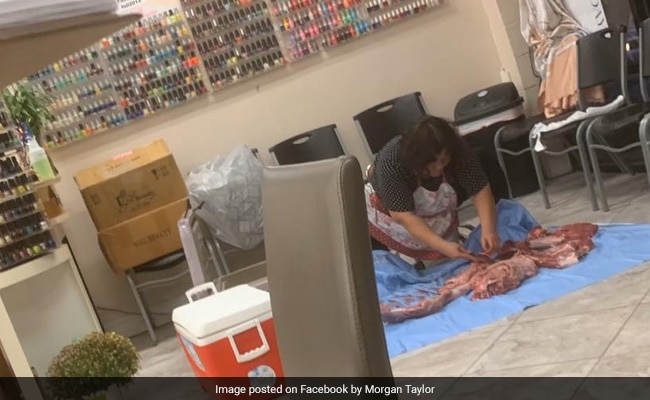 A salon worker was photographed butchering a deer on the salon floor.

A college student getting her nails done at a North Carolina nail salon last week experienced something very strange. Morgan Taylor, a student at High Point University, posted about the experience on Facebook, where it quickly went viral. Her photograph, taken last Wednesday at Diamond Nails salon in High Point, shows a salon worker butchering a deer carcass on the floor. The woman appears to be butchering meat in full view of salon customers.

Ms Taylor says the incident has prompted her to look for a new nail salon.

"I was sitting there getting my nails done and looked over and they were pulling out deer meat from a cooler and started cutting it without gloves on, on a tarp on the floor of the entry of the nail salon," Morgan Taylor told news website KCCI.

"Seeing a deer that was being cut up next to me really made me worried about the sanitation of the salon," she said. Her concerns were echoed by many who commented on her picture of the manicurist with a hunk of meat on the salon floor.

The picture has received more than 5,000 'shares' and thousands of comments since being posted.

"This is a health violation and Diamond Nails needs to be reported," wrote one person in the comments section. "Pretty sure that's illegal," said another.

The incident was reported by Ms Taylor to the North Carolina Board of Cosmetic Arts. They are now investigating the incident.