"Every part of me aches to be with her, but I know I can't." 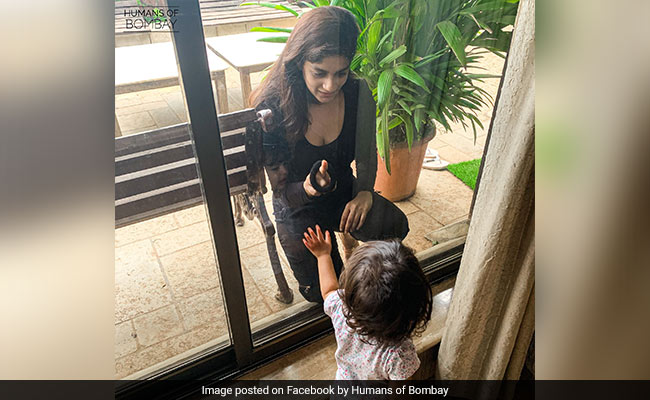 A woman from Mumbai has opened up about the struggle of staying away from her 17-month-old daughter after testing positive for the highly contagious coronavirus. "When the doctor told me I had Covid, my first question was, 'What about my daughter?'" said Alifya Jhaveri to 'Humans of Bombay'. Thankfully, her daughter was safe from the disease - but the real struggle for Ms Jhaveri was keeping her at a distance while being quarantined at home.

"Since I showed only mild symptoms, I'd have to be quarantined at home, which was the easy part," she said. The "not-so-easy" part was staying away from her baby for two to four weeks.

Speaking to Humans of Bombay on day six of her quarantine, Ms Jhaveri revealed that the only thing keeping her sane is the thought of hugging her daughter soon. "Every day she comes to the bedroom window, keeps her little finger on the glass and waits for me to keep mine," says the COVID-19 patient. "In that moment, every part of me aches to be with her, but I know I can't."

Ms Jhaveri also spoke about the way her toddler has been coping with her absence, saying that she cries for her at night. "My husband and sister-in-law are trying their best, but when she wakes up at 2 am to cuddle with mumma and I'm not there, it breaks my heart."

She concluded her interview by saying that she now spends her time cooped up in her home - cooking, cleaning and watching her daughter through the window. "I'm waiting to squeeze her and put her to sleep every night... something I'll never take for granted again."

"This situation is every mother's nightmare if they have little kids," wrote one Facebook user.

"God bless you with speedy recovery so that you get to be your daughter again," another said.

Last month, a doctor had opened up about the guilt he felt at exposing his family to COVID-19 in an interview to Humans of Bombay.