The post has received more than 40,000 views and 3,200 likes since it was published. People posted a variety of remarks in response to the video. 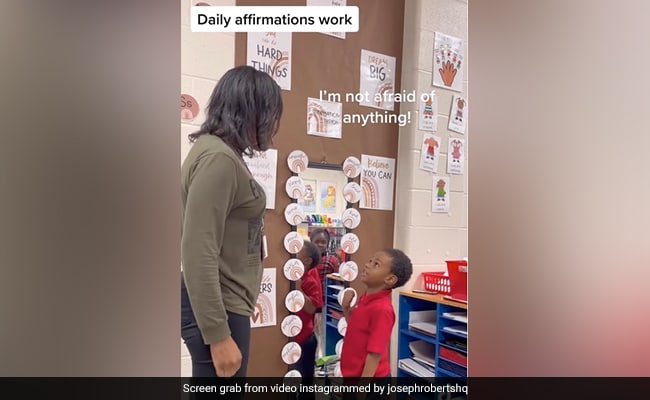 Mr Joseph Roberts captioned the video as "Lil Dude was feeling that!!!

Instilling confidence in kids is just as vital for teachers as teaching them a subject. The teacher's job is half done if a pupil believes they are capable of anything. An intriguing technique used by a teacher in the US to encourage her children to believe in themselves is shown in a video that has gone viral.

Mr Joseph Roberts captioned the video as "Lil Dude was feeling that!!! Our students need this!

The post has  received more than 40,000 views and 3,200 likes since it was published. People posted a variety of remarks in response to the video.

An affirmation is a brief but impactful statement. They empower you to actively manage your thoughts. Affirmations can increase self-worth by elevating both your belief in your own abilities and your positive self-perception.

According to the National Center for Biotechnology Information in the US, "Self-affirmations are acts that affirm one's self-worth, often by having individuals reflect on core values, which may give individuals a broader view of the self. This in turn can allow individuals to move beyond specific threats to self-integrity or self-competence. "

"A large body of literature; however, demonstrates that a class of interventions called self-affirmations have benefits across threatening situations; affirmations can decrease stress, increase well-being, improve academic performance and make people more open to behavior change."

Photo Of Lionel Messi's Golden Boots Goes Viral, Here's What Is Special About Them