Sara Tendulkar Made Her Modelling Debut For This International Clothing Brand 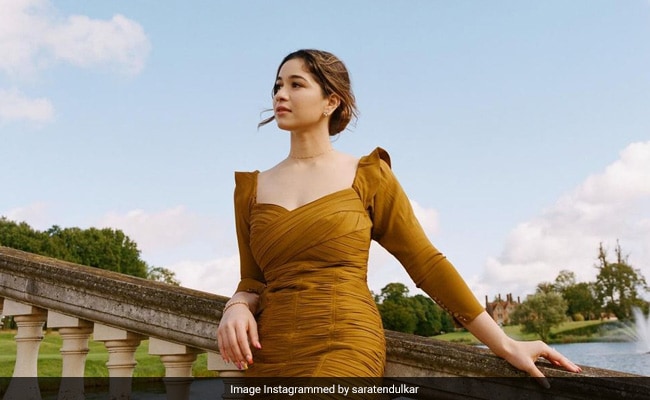 Sara Tendulkar made her modelling debut for clothing brand Self-Portrait.

Sara Tendulkar has stepped into the world of modelling with an ad campaign for an international clothing brand. The 24-year-old daughter of Sachin Tendulkar has starred in an ad campaign for Self-Portrait, which will be available in India exclusively on e-commerce platform Ajio Luxe. Sara took to Instagram on Tuesday to share a promotional video for Self-Portrait. The video also features Banita Sandhu and Tania Shroff.

While Banita Sandhu is an actress who made her Bollywood debut in the 2018 film October opposite Varun Dhawan, Tania Shroff is an Instagram influencer and the daughter of industrialist Jaidev Shroff. The video shows the three of them posing in several outfits from Self-Portrait, which was established in 2013 by Han Chong in London.

Sara Tendulkar also shared some snaps from the photoshoot, for which she wore a camel-coloured crepe dress.

The photoshoot has received a lot of love on social media, and compliments have poured in for Sara's modelling debut.

Sara is the eldest child of Sachin and Anjali Tendulkar. After completing her schooling in Mumbai, she graduated in medicine from University College London - following in the footsteps of her mother, who is a pediatrician by profession.

Her younger brother Arjun, meanwhile, has followed in their father's footsteps - he was picked by Mumbai Indians in the IPL 2021 auction but did not play in any of the matches.

Sara Tendulkar, up until now, had stayed mostly away from the limelight - although she posted frequent updates on Instagram, where she has 1.6 million followers.

Watch: This Video Of A Massive Black Widow Spider Is Not For The Faint-Hearted