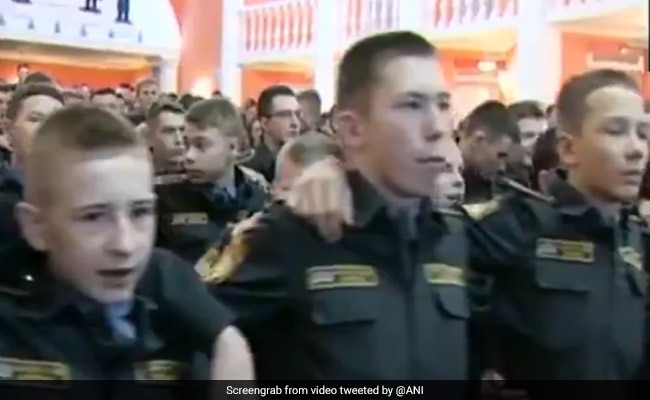 A video going viral on social media websites proves that the Russian military force can also carry a tune to save their lives -- and a tune no less patriotic.

While singing the famous Indian song by Mohammad Rafi -- "Ae watan, ae watan, hamko teri kasam" from the 1965 Bollywood movie "Shaheed" -- young Russian military cadets, along with their families and senior Indian military personnel, can be seen heartily swaying to the music in a video shared widely on Twitter.

Brigadier Rajesh Pushkar, the Military Advisor at the Indian Embassy in Moscow, can also be seen in the video singing along.

Twitter users lauded the "brotherhood" between India and Russia and said that they got "goosebumps" after watching the video.

A twitter user said: "Nice to see Russian youth singing to a Hindi patriotic song. Not unique for Russo-Indian relations though."

Another social media user said: "Russia is true counterparts of India since Independence. Glad to have their support!"

India and Russia enjoy excellent relations, based on the strong foundation of strategic partnership. Both countries cooperate extensively in the strategic fields of defence, civil nuclear energy and peaceful uses of space.

India has been buying military hardware from Russia for decades, and mass manufacturing them as well under licence. Last year, India agreed to buy the S-400 surface-to-air missile systems from Russia and paid $800 million as an advance this year for five S-400 units.