Excerpt: A video released showed extravagant interiors, with extensive use of gold in furniture, wall art frames and decorative pieces 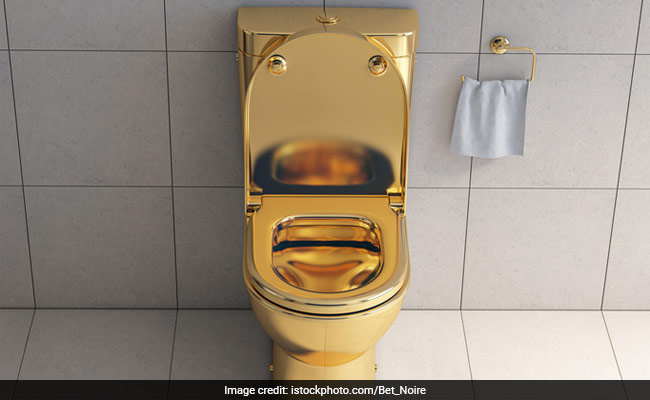 The Russian authorities have uncovered a bribery scheme running into hundreds of thousands of dollars that involved many traffic police officers. But the head of traffic police's lavatory and its floor has caught everyone's attention. The toilet bowl is made up of gold and the floor has matching marble. The police chief's monarch-style residence is a modern-day elite home in southwestern Russia's Stavropol region. Police Colonel Alexei Safonov has been detained and he now faces between eight and 15 years behind bars if he is found guilty, reports The Moscow Times. The investigative committee released footage of Mr Safonov's opulent residence with baroque interiors and lush green lawns, where luxury vehicles were parked.

The video showed extravagant interiors, with extensive use of gold in furniture, wall art frames, and decorative pieces. Even the kitchen drawers and furniture were dripping in gold ornamentation. There was also an outhouse on the side of the main entrance, possibly for guests.

However, the most surprising use of gold was to decorate the toilet bowl.

Posted on July 20, the 49-second YouTube video, which looks more like a luxury real estate advertisement, has received more than 3.45 lakh views and a number of comments in Russian.

Watch the video released by the investigative committee here:

The Moscow Times reported that Mr Safonov and six of his subordinates have been accused of receiving 19 million Russian Ruble (roughly Rs 1.92 crore) in bribes over several years in exchange for giving fake permits to businesses to operate heavy vehicles illegally. These permits allowed the owners of the vehicles to transport cargo free of cost in violation of administrative legislation on the territory of the Stavropol Territory, read the caption in the video released by the investigative committee when translated into English from Russian.

The Moscow Times also cited a pro-Kremlin lawmaker, Alexander Khinshtein, as saying that at least 35 members of the Stavropol traffic police department were likely involved in the scam.

Mr Khinshtein shared a number of photos of Safonov's mansion on his social media page. One of the photos — of the golden toilet bowl — quickly went viral.

British daily The Times reported that armed officers from the National Guard and Russia's main security agency FSB raided several places in the region and took these officials into custody.