Rhino Takes To The Streets, Chases A Man Away In Viral Video

The rhino briefly chases a man walking on the same road before losing interest and going on its own way. 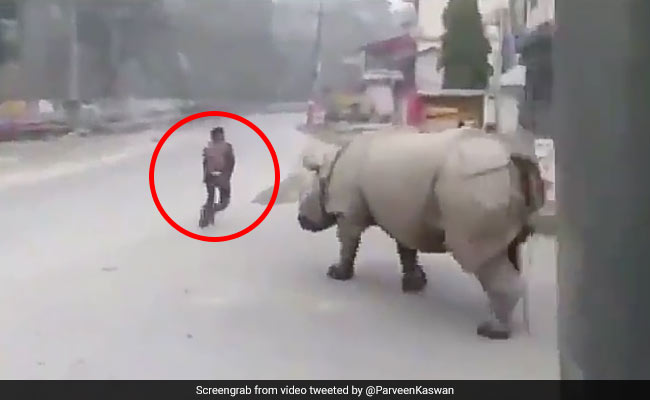 A video shows a rhino walking down a mostly-empty street in Nepal.

A video shared by Indian Forest Services officer Parveen Kaswan shows a rhinoceros walking down a mostly-empty street in Nepal. The video emerged online amid a nationwide lockdown that has been imposed in the country to control the spread of coronavirus. According to The Diplomat, Nepal announced a week-long lockdown on March 24, which has now been extended until April 15. Because of the lockdown, the country's busy markets have been shut down and people have been asked to avoid going out, unless it is for essentials.

In the midst of this, the video of the rhino 'inspecting' the streets with shuttered shops has captured social media's attention. The undated video was taken at the Chitwan National Park area, where rhino sightings are common even without a lockdown. The national park has a sizeable rhino population, and the large animals have been known to venture out of forests.

In the now-viral video, the rhino is seen walking down a road where only a few people are visible. A few seconds in, it briefly chases a man walking on the same road before losing interest and going on its own way.

"So this #rhino thought to take things in his own hand. Went for an inspection," wrote Mr Kaswan while sharing the video. "Btw rhino venturing out from forest happens a lot, even without lockdown," he added.

So this #rhino thought to take things in his own hand. Went for an inspection. Btw rhino venturing out from forest happens a lot, even without lockdown. Forward. pic.twitter.com/Ck1sft3Emb

In the comments section, he explained that it is not uncommon to see rhinos in the Chitwan National Park area. "Rhino venturing into human habitation is common for all PAs. In India also," he said.

The video has collected over 1.1 lakh views and more than 8,500 'likes' since being shared on Monday.

Cricketer turned conservationist Kevin Pietersen, who has set up his own charity called 'Save our Rhino in Africa and India', was among those who responded to the video.

Others also filled the comments section with their reactions to the footage.

The person breaking the lockdown was personally chased away by his highness ;) ;)

This is Chitwan National park during its peak season. Went 2 times and spotted rhinos on the road both the time. It is very common over there pic.twitter.com/ZiaCJlWCy6

Earlier, a video of an elephant strolling down a street in Kerala had also gone viral on social media.