In Kerala, Elephant Takes To Streets To 'Inspect' Lockdown

An elephant walks down an empty street lined with shuttered shops. 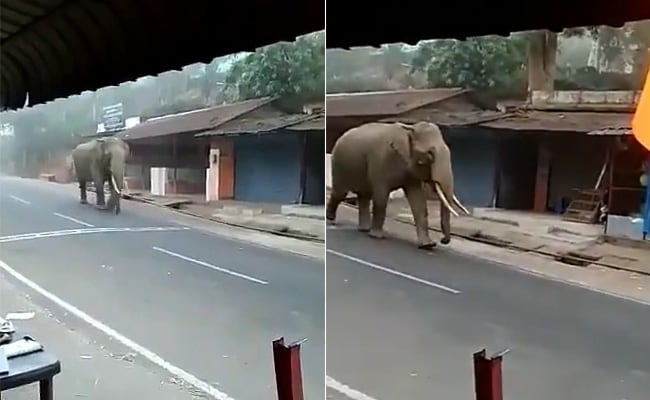 A viral video shows an elephant on the road.

A video of an elephant strolling on the near-empty streets of Kerala is being widely shared since it emerged online a few days ago. The video was posted on Twitter by IFS officer Sudha Ramen, who said she received it over WhatsApp.

In the video, which was filmed near Wayanad, the tusker is seen walking purposefully down an empty road. After a few steps, it pauses to look around at the shuttered shops lining the road, as if to inspect something, before continuing on its journey.

"Meanwhile, a tusker inspects the implementation of the lockdown in Kerala near Wayanad," wrote Ms Ramen while sharing the video. In the comments section, she also explained that elephants are common in the area and said: "Elephants are more common in this part. This maybe a common walk or a morning stroll. Just that the body language of this tusker mimics a 'Monitoring officer'."

Meanwhile, a Tusker inspects the implementation of the lockdown in Kerala near Wayanad. pic.twitter.com/GTf1FkAMMg

Since being shared on the microblogging platform one day ago, the video has collected more than 1.2 lakh views and over 6,500 'likes'.

"Looks like the tusker is appointed by government to make sure people dont come out their house. An effective officer," wrote one person in the comments section.

"Elephant be like 'Where did all that noisy lil dudes go?'" another joked.

The video comes amid increased wildlife sightings across the country, thanks to a nation-wide lockdown to contain the spread of the highly contagious coronavirus. Before this, a video of an elephant in Haridwar had also gained attention on social media.

An elephant roaming the streets of Haridwar.

I know these are the toughest times for us, and they are kind of scary. But at the same time I can't stop feeling glee at these innocent animals and how they're free and happy ???? pic.twitter.com/Es1t7nDkSb

Take a look at some other videos of animals reclaiming their space here.