Revered 'White' Elephant To Be Royal Present To Thai King

Although not an albino, Ekachai is white - an indication of purity in Thai tradition - in all the right places 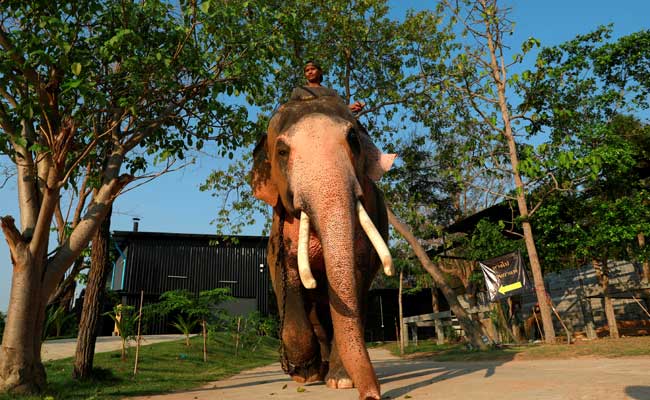 A large portrait of Thailand's King Maha Vajiralongkorn dominates one end of the open-air enclosure where an elephant known as Plai Ekachai starts his day at a conservation centre in the country's northeast. Since last year, the 33-year-old male elephant has been treated with reverence as a deity after being identified as the first auspicious white elephant to be discovered under the reign of King Rama X, as the monarch is also known. The elephant is to be presented as a gift to the new king sometime after this weekend's coronation ceremonies, the first the country will have seen in 69 years

"There is no greater merit than to raise such an elephant for the king," says Thanabadee Promsook, 35, who runs the centre housing nine other regular elephants. Thanabadee refers to the elephant as "His Highness" and kneels before him daily

Elephants classified as white in Thailand are not necessarily albino or solid white but are more pale in colour than normal and are rare and especially revered. They are regarded as a symbol of kingship and treated as deities, mainly due to the mythical white elephant Airavata, or Erawan as Thais call him, who is the vehicle of Indra, king of the Hindu gods

In Thai Buddhism, the appearance of white elephants is associated with the moral authority of a monarch, whose ability to attract such divine beings is one indication of his divine mandate, said Edoardo Siani, a cultural anthropologist of Thailand at Kyoto University

"Buddhist kings show possession of white elephants as a proof of their legitimacy," said Siani

These elephants willingly submit to the authority of kings out of recognition of their moral strength." King Vajiralongkorn's late father, King Bhumibol Adulyadej, received 10 white elephants during his 70-year reign, before he died in October 2016

When his remains were kept at the Grand Palace awaiting a royal cremation, 11 elephants decorated to look like white elephants crouched down before the palace walls in a symbolic gesture to honour the "people's king".Thanabadee said he was overcome with joy to present the new king with the first white elephant of his reign, especially in the auspicious light of the coronation events. Although not an albino, Ekachai is white - an indication of purity in Thai tradition - in all the right places. According to ancient Brahman texts, a white elephant has seven auspicious characteristics: white eyes, a white soft palate, white toenails, white hair, white skin, white tail hair, and white genitals.

EVERYTHING AN ELEPHANT CAN BE

Plai Ekachai hails from the southern tourist town of Krabi, where he was forced - and refused - to haul heavy logs and let tourists ride him, said Thanabadee, who bought him in 2010 and brought him about 1,200 km (750 miles) to Maha Sarakham.

There, Ekachai spends all his time with his mahout, Vichian Prathumdee, 44, who takes care of him in every way from collecting his droppings to showering him with kisses and cuddles."It's the greatest honour of a mahout's life

I'm filled with the greatest pride to be his caretaker

It's my life's miracle, be it due to merit or luck," said Vichian, who has 16 years under his belt handling more than 500 elephants prior to Ekachai

Vichian then takes him out for an hour-long stroll around the camp for exercise, before scrubbing him clean in a shower to rinse away last night's dirt, revealing smooth skin and light spots all over his features

Every day visitors come to see Ekachai, believing it will bring them luck

There is no set date yet for when Ekachai will undergo an official ceremony to become a royal white elephant of King Rama X, which will see him granted a royal name and title

It will be the country's first such event since 1978

Until then, Thanabadee and Vichian pledge to care for Ekachai to the best of their abilities

"From then to now, he has proven a true king of elephants

He is formidable, yet full of moral compassion," Thanabadee said

"He is everything an elephant can be."