The incident is currently under investigation 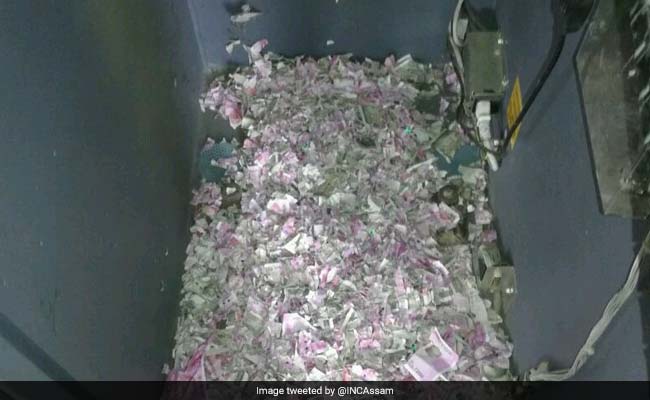 Twitterati are both amused and stunned at the strange incident.

New Delhi: A bizarre incident in Assam has caught at the attention of Twitter and left many shocked. According to several reports, a State Bank of India (SBI) branch ATM in Assam's Tinsukia district bore the wrath of rodents that left currency notes worth Rs 12 lakh completely destroyed. Pictures of the shredded notes inside the ATM have left Twitter stunned. While many expressed their shock over the incident, several others tried to make sense of the weird incident.

Following a technical failure, the SBI ATM in Laipuli area - still containing cash - had been out of order since May 20, reports Indian Express. A day before, a private security firm had deposited Rs 500 and Rs 2,000 notes amounting Rs 29.48 lakh, reports The Hindu.

On June 11, when technicians arrived to fix the ATM, they found currency notes of Rs 2,000 and Rs 500 torn to pieces. The overall cash destroyed by the rats amounted to Rs 12,38,000, reports the newspaper. Undamaged currency notes amounting to Rs 17.10 lakh were recovered from the ATM.

Local journalist Nandan Pratim Sharma Bordoloi tweeted a video, believed to be from the same ATM. The video shows a dead rat laying in a pile of shredded notes.

The viral news forced HDFC Bank to tweet a clarification, saying the incident did not occur at one of their ATMs, as was suggested by some viral forwarded messages.

#FakeNews Pls note this is NOT an HDFC Bank ATM. The below photograph has been doing rounds on social media for sometime. Like we have said earlier, this isn't an HDFC Bank ATM. This seems like a prank but unfortunately showing our bank in bad light. Please do not believe in it. pic.twitter.com/eoLVl3S5HW

It's SBI's ATM at Tinsukia, Assam as published in local news paper. pic.twitter.com/U3KrJ4wjbO

Twitterati are both amused and stunned at the strange incident.

"Looks like the mice are having a demonitisation of their own," says one Twitter user. "The money launderer's version of 'My dog ate my homework'," says another.

How can a mice tore to shreds notes worth Rs 12 lakhs inside an ATM belonging to the State Bank of India (SBI) in a night ?

This is what happens when rat enters into ATM pic.twitter.com/UTcPkE0cZm

Money is Honey but not for the rats.
'Surgical Strike' by mice on SBI ATM, whopping Rs 12 lakhs destroyed.

Promoted
Listen to the latest songs, only on JioSaavn.com
In a nearly unprecedented & shocking incident, notes worth over Rs.12 lakh were found shredded apart into pieces, allegedly by mice, in an ATM in Tinsukia, Assam. pic.twitter.com/sv0cGeCOL2- Ketan Kundaliya (@kundaliyaketan) June 19, 2018

Surgical strike by rats at an ATM machine !! pic.twitter.com/1h7h24QgP0

Tinsukia district Superintendent of Police, Mugdhajyoti Mahanta tells The Hindu the maintenance company had called its engineer from Kolkata to repair the ATM. "When the engineer and other officials opened the ATM on June 11, they found destroyed notes and also found a dead mouse inside the ATM," The Hindu quotes Mr Mahanta as saying.

A police complaint has been filed and the incident is currently under investigation, according to several reports.Click for more trending news