Rajasthani Model Is Insta-Famous As Smriti Irani Shares Her Story

"There is a story behind many faces at the Lakme Fashion Week. You see the glamour, you see the glory. They also hide a lot of tears," said Smriti Irani 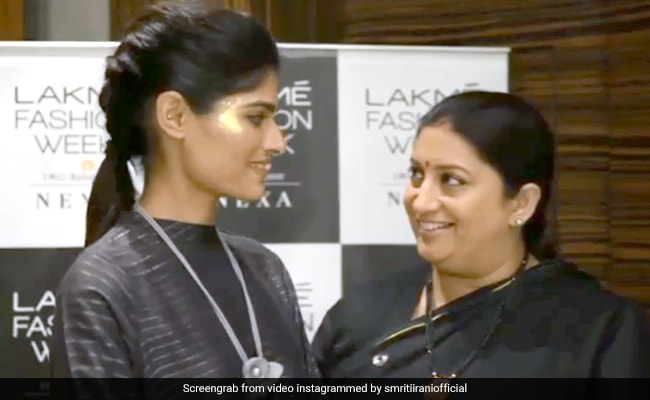 Smriti Irani with Nisha Yadav at the Lakme Fashion Week.

Union Minister Smriti Irani took to Instagram on Saturday to share a heartwarming video, introducing her followers to Nisha Yadav - a lawyer and model from Rajasthan. Ms Irani was at the Lakme Fashion Week 2019 in Mumbai to launch the Su.Re (sustainability resolution) project by the Textile Ministry when she met Ms Yadav. In the video, she spoke about the success Ms Yadav found after struggling and working hard for it.

"There is something special about Nisha," Ms Irani says in the video, talking in Hindi. "She is not just a model, she has also completed her second year of law from Rajasthan University and is now in her third year. She is currently practicing in Delhi and also walking the ramp at Lakme Fashion Week."

Tragically, her father asked her to leave home after she refused to marry at a young age. Her sisters, who supported her, were also asked to leave.

"Things are fine now. He has accepted us," a visibly emotional Ms Yadav says in the video. She then reveals that her four sisters have also found success in life - one is an IAS officer, another in police, the third one is a software engineer while the fourth is a professor.

"Iska matlab betiyon ki shaadi tab jab padhai puri ho, jab balik hon aur jab unki ichcha ho (Get your daughters married when they have completed their education, are adults and when they want to get married)," says Ms Irani.

"There is a story behind many faces at the Lakme Fashion Week. You see the glamour, you see the glory. They also hide a lot of tears," she adds while concluding the video.

Since being shared online two days ago, the video has collected over 1.5 lakh views and over 800 comments. Nisha Yadav also responded to the video and thanked Ms Irani.

"Leaders become great not because of their power because of their ability to empower others. So, thank you so much @smritiiraniofficial ma'am for your encouragement," she wrote in the comments section. "I lived this moment totally and learned how to stay calm, cooperative, polite and grounded. The way you communicated with me I felt like you are my old friend. Lots of respect."

Others also praised Ms Irani for sharing Nisha Yadav's story with the world.

"You are amazing, your voice will give courage and perseverance to the youth in the fashion industry," wrote one commenter. "Bringing a story like this in the public domain is really inspiring," said another.