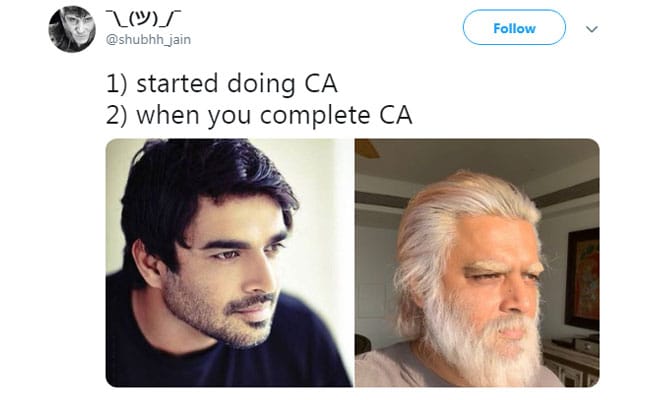 R Madhavan's transformation has inspired memes and jokes on Twitter.

Actor R Madhavan is all set to play the role of ISRO scientist Nambi Narayanan in his upcoming film Rocketry: The Nambi Effect, which will also mark his debut as a director. Yesterday, the actor shared pictures of his transformation into Nambi Narayanan on social media - and the resemblance left many stunned. To play the 77-year-old scientist, Madhavan sports white hair and a beard.

However, the transformation also became fodder for a lot of hilarious memes. Many on Twitter took to juxtaposing a picture of Madhavan with a picture of his latest look to create entertaining transformation memes. We collected some of the best ones for you. Take a look:

Entering SBI Coming out of it pic.twitter.com/J1FEez61sx

*when you're 25 and unmarried at family function.*

1) How you really look .
2) How your relatives see you . pic.twitter.com/1FaWyd4gpQ

Marwadi deciding to do something else apart from going to dukan. pic.twitter.com/ZXCQM9kAdd

Me: I'm ready to go. How much time you will take?

When a casting director says, "I have your profile, I will call when something comes up for you"#apnatimeayega@ActorMadhavanpic.twitter.com/TOWBPbsIbY

Madhavan also took to Twitter to appreciate some of the hilarious memes:

This isn't the only transformation meme to go viral recently. In the last few days, the #10YearChallenge also had the Internet buzzing with funny jokes and memes.

Which meme made you laugh the hardest? Let us know using the comments section below.