The Queen and her only daughter, Princess Anne, appear to be having a silent argument in the footage. 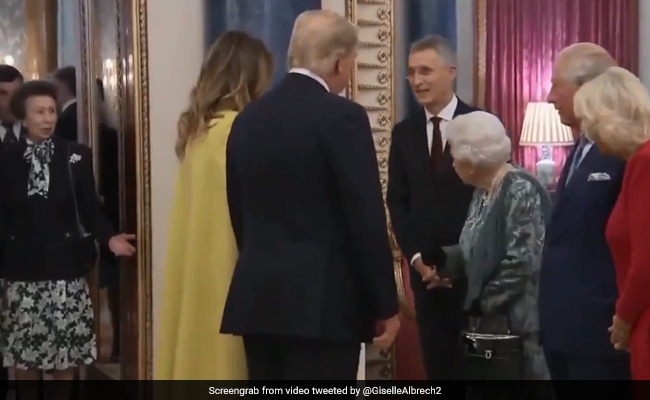 Princess Anne was filmed standing on the doorway as the Queen greeted the Trumps.

A video that appears to show Britain's Princess Anne failing to greet US President Donald Trump is being widely circulated online. The video was filmed at the Buckingham Palace reception hosted by Queen Elizabeth II for NATO leaders on Tuesday night.

The Queen and her only daughter, Princess Anne, appear to be having a silent argument in the footage that has amused many.

The video shows the Queen, along with her son, Prince Charles, and Camilla, Duchess of Cornwall, welcoming Donald and Melania Trump to the reception. The royals shake hands with the Trumps while Princess Anne stands on the doorway, waiting to enter the state rooms of the Buckingham Palace, according to Express News.

After greeting the Trumps, the Queen looks at her daughter and gestures towards Donald and Melania Trump, apparently asking her to greet them. Princess Anne, 69, just shrugs in response.

The Queen chastising Princess Anne for not greeting Trump and Anne not giving a single shit is the mood we all need to take into today pic.twitter.com/W5cCFlq2Ui

The video has been viewed more than 2 lakh times on Twitter, collecting a ton of reactions.

Earlier on she was shaking the hands of Save the Children staff. People who really deserved her attention.

I want them to lead the cast of Golden Girls remake, so marvellous. pic.twitter.com/5ixpo1t1hn

Princess Anne also appears in another video from the reception that has gone massively viral online. The video shows the leaders of Britain, Canada, France and the Netherlands mocking Mr Trump's lengthy media appearances.