Before the competition begins, experts examine the camels to avoid fraud and check that the animals have not had any surgical enhancements. 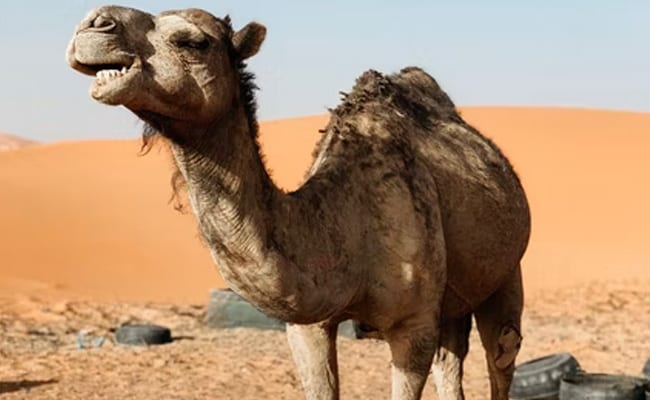 Qatar is hosting the men's football World Cup, but along with it, a very different contest is also taking place in the country. Camels from across the Gulf states are taking part in what has been called a "camel beauty World Cup" in which the long-legged beauties are competing to be named the most attractive. The event is being held at the Qatar Camel Mzayen Club in Ash-Shahaniyah, according to news agency Reuters. The participating camels are divided in different categories depending on their age and breed.

During the event, the constantly chewing camels were paraded before an audience seated indoors and enjoying coffee and sweets.

The competition is fierce among different types of camels.

"Black camels are judged according to the size of the body and the head and the location of the ears. But with the Maghateer-type camel, we look for proportionality and the ears should be dropping down, not stand straight, in addition to the way the mouth is curved," said Mr Al Athba.

But before the competition begins, experts examine the camels using X-rays to avoid fraud and check that the animals have not had any surgical enhancements.

Last year, a camel beauty pageant in Saudi Arabia was hit by a cheating scandal after 43 entrants were disqualified for botox injections and other cosmetic enhancements.

Organisers have in recent years cracked down on cosmetic enhancements, a malpractice that has thrived amid stiff competition and despite heavy penalties.

The enhancements are made in a bid to make the camels' lips droopier and their humps more in shape - key attributes in the pageant.