Puppy German Shepherd Meets Kittens For The First Time, Its Reaction Will Melt Your Heart

The dog's gentle and wholesome reaction has moved the hearts of social media users, who showered love on the little puppy and kittens. 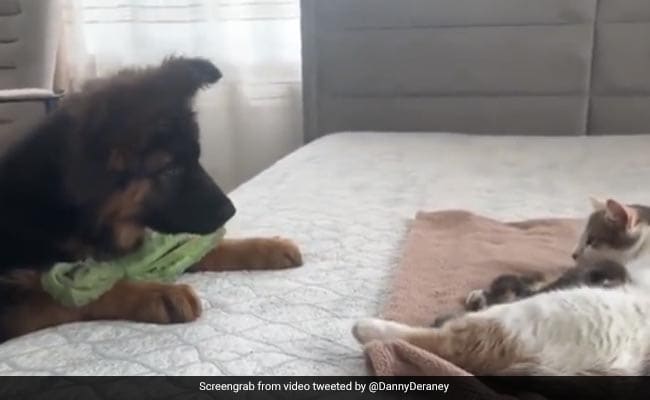 Not just humans, animals too can perceive and understand a wide range of emotions. Dogs, especially, have emotions just like humans do, experiencing feelings such as love, anger, fear, grief, anxiety, and joy. One such video has captured a puppy German Shepherd's wholesome reaction when it meets little baby kittens for the first time.

“German Shepherd puppy meets the new kittens for the first time,” the video caption of the clip shared by Danny Deraney reads.

The video shows the mother cat lying on a bed with her newborn kittens. A puppy German Shepard walks in and adorably looks at the kittens with curiosity, but from a distance. To welcome its new friends, the dog even gets a toy for them.

Moments later, the pet owner helps the dog climb onto the bed, so that it can have a closer look at the little cats. The dog inches a little closer, still looking at the kittens lovingly, and sniffs them. He also licks the mother cat to show his affection toward her. Meanwhile, the mother cat also seems completely at ease with the dog and allows it so close to her precious ones.

The dog's gentle and wholesome reaction has moved the hearts of social media users, who showered love on the little puppy and kittens.

One user wrote, ''That's so beautiful.. he even brought his toy for them to see. And the cat was like “look...my babies...I did good...you may adore me now” aww I needed this.'' Another commented, ‘' German Shepherd puppy AKA the most adorable creature to ever step foot on this earth.'' A third said, ‘' So sweet! And the way the pup jumped back close to the end tells me kitty had connected with a left hook in the not so distant past and pup def learned from the experience.'' A third said, “So sweet and gentle!''