Priyanka also holds the record for being the first woman in India to scale Mt Makalu, the fifth highest mountain in the world 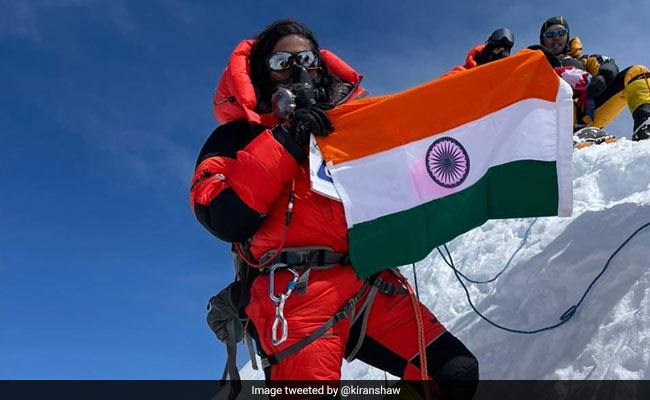 Priyanka Mohite scaled the peak of Mt Annapurna on April 16.

Priyanka Mohite, on Friday (April 16), became the first Indian woman to scale Mt Annapurna, the tenth highest mountain in the world. Priyanka also holds the record for being the first woman in India to scale Mt Makalu, the fifth highest mountain in the world at 8,485 metres. The 26-year-old mountaineer from Satara in Maharashtra had achieved this feat in May 2019. Scaling new heights has been a familiar turf for Priyanka, who has also previously climbed Mt Everest in 2013 and Mt Lhotse in 2018. She scaled Mt Everest at the age of 21, making her the third youngest Indian to do so.

Her latest achievement was celebrated on Twitter by the founder and chairperson of Biocon, Kiran Mazumdar-Shaw. Priyanka is an employee of Syngene International, a publicly listed subsidiary of Biocon. Kiran Mazumdar-Shaw wrote, "Our colleague Priyanka Mohite scaled the peak of Mt. Annapurna, (8091 mtrs) 10th highest mountain in the world, on 16th April 2021 at 1.30pm.- first Indian woman to do so! We at @SyngeneIntl are so very proud of her," followed by clap emojis.

Twitter reacted to the news with words of praise and encouragement. Wishing Priyanka more such records, one user wrote, "Great!!! Congrats to Priyanka. Keep scaling more and more heights!!! Have a fabulous year ahead."

Great!!! Congrats to Priyanka. Keep scaling more and more heights!!! Have a fabulous year ahead.

Another said, "Fabulous...What a feat!"

Many also said that positive news such as this is a morale booster in these bleak times.

Congratulations .... Priyanka Mohite... we need more positive and celebratory news like this.

Sharing that Priyanka's achievement was an inspiration, one user said, "When I joined Syngene, we had a great talk by her. Very inspiring indeed."

When I joined Syngene, we had great talk by her. Very inspiring indeed..???? pic.twitter.com/eHjhUK7a1A

Priyanka also responded to the tweet by thanking Kiran Mazumdar-Shaw.

Thank you so much for your support ma'am. https://t.co/Ir6Ih8cCnz

Take a look at some of the other tweets in praise of Priyanka.

10th highest but probably the most dangerous of all eight thousanders

According to the Kathmandu Post, as many as 68 women scaled Mt Annapurna on Friday. This is the highest number of climbers to reach the top of the mountain in a single day.