"Morning puja on the day of my wedding (22 years ago!)" Priyanka Gandhi captioned the pic 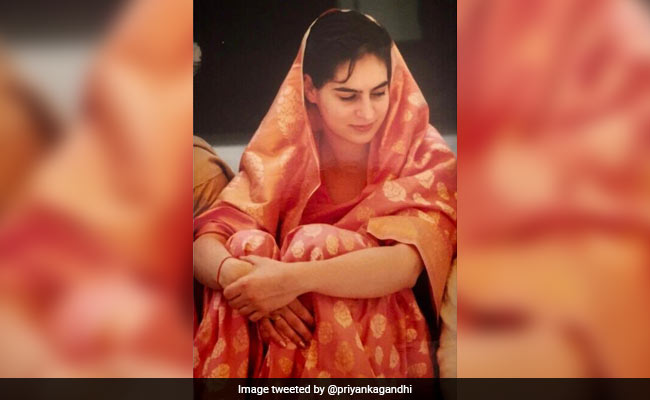 Congress General Secretary Priyanka Gandhi Vadra is winning Twitter with two posts this morning. A few hours ago, she joined a long list of women sharing their favourite saree pictures on the social media platform as part of the viral #SareeTwitter trend. "Morning puja on the day of my wedding (22 years ago!)," the 47-year-old captioned her photo that shows her in a pink Banarasi saree. The tweet immediately prompted "happy anniversary" posts.

Priyanka Gandhi later clarified in another tweet that it wasn't her anniversary, following it up with a message for husband Robert Vadra.

Thanks for all the anniversary wishes...but it's just a throwback photo for the #SareeTwitter guys, my anniv is in Feb!

(@irobertvadra, you can still take me out for dinner!????)

Morning puja on the day of my wedding (22 years ago!) #SareeTwitterpic.twitter.com/EdwzGAP3Wt

After saree pic collected over 18,000 'likes' and hundreds of "happy anniversary" wishes, Priyanka Gandhi thanked her followers and clarified that her wedding anniversary is actually in February.

"You can still take me out for dinner!" she added after that, tagging her husband, businessman Robert Vadra and completing her tweet with a wink emoji.

The #SareeTwitter trend began on Monday and has seen celebrities and politicians sharing pictures of their favourite sarees on the microblogging website. Others who have taken part in this viral trend include Shiv Sena's Priyanka Chaturvedi and BJP's Nupur Sharma.

Because #SareeTwitter & I cannot miss tweeting with this hashtag :) pic.twitter.com/VTC2ISlvoy

Here comes a trend I can completely relate to! #SareeTwitterpic.twitter.com/CrP95J5edv

What do you think of the trend? Let us know using the comments section.