Typically, the department said its animal wardens don't respond to snake calls, but noted that this was a "special circumstance." 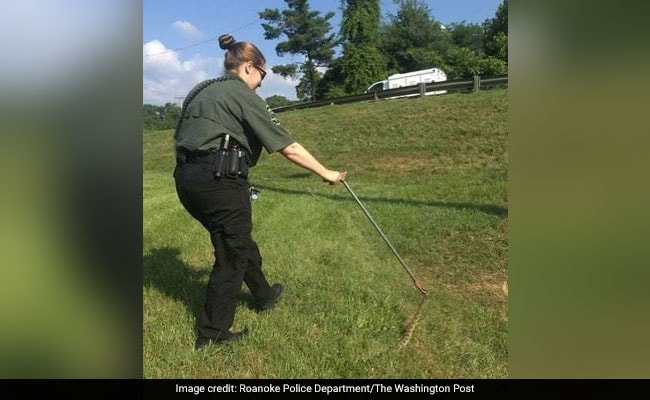 Animal warden officer helping the snake get safely into a grassy area off the roadway.

A venomous snake needed to get to the other side of the road in Virginia, so police helped it along by stopping traffic at a busy intersection.

The incident unfolded Tuesday morning in Roanoke along Franklin Road, according to the Roanoke Police Department.

Wildlife experts said the snake is a timber rattler, which is venomous. Timber rattlesnakes are found in much of the eastern U.S., as well as in western Virginia.

Randy Leftwich told CBS News that he took a video of officers stopping traffic for the snake as he was dropping off dry cleaning. At first, he said, he thought it was a turtle.

"When I saw the snake I thought cops get such a bad rap these days, here are two officers helping out an animal," he said.

The video shows police officers redirecting traffic as the snake slithers into the intersection. An animal warden officer is seen helping the snake get safely into a grassy area off the roadway.

"Awesome to see these guys out there helping," Leftwich told CBS News.

Suzie Gilley, a wildlife expert for the Virginia Department of Game and Inland Fisheries, said snakes are unlikely to harm humans.

"These snakes are an important part of the ecosystem and don't tend to be overly aggressive," she said. "They simply want to be left alone to do their job of eating rodents."

Still, Virginia officials warned residents to watch out for snakes as they typically are more active in the summer heat. Earlier this month, a snake slithered out of a car's air vent as a Virginia woman was driving. And a snake was found near the stairs of a commuter rail station in Maryland.

It is illegal to kill or relocate snakes in Virginia, unless they're an "immediate danger to people," the Roanoke Police Department said in a Twitter message.

Typically, the department said its animal wardens don't respond to snake calls, but noted that this was a "special circumstance."

There were plenty of comments on social media.

Steve Gianni wrote, "I'd like to commend the snake for observing pedestrian law and staying in the crosswalk." Elizabeth R. Apgar Triano wrote on Facebook, "Whoa! Brave and wow!"

Promoted
Listen to the latest songs, only on JioSaavn.com
Not all were in favor of the snake. Andrew Wilkins wrote on Facebook, "I'm killing every one that I see."