United Airlines confirmed that the flight turned back to Chicago "due to severe weather." 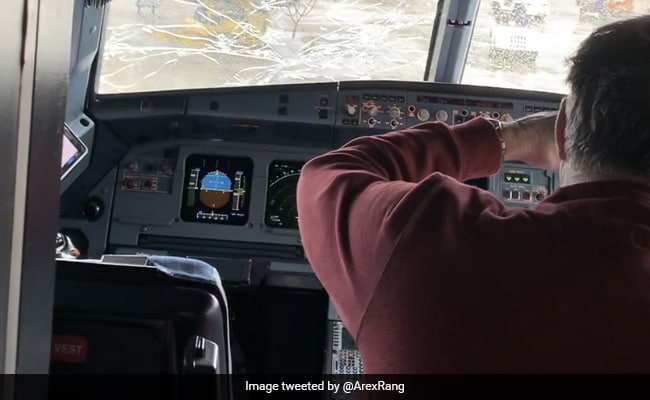 Alex Lang, a passenger on the flight, tweeted a photo of the front windshield of the airliner.

A Dulles-bound United Airlines flight had made an emergency landing Monday after its windshield was cracked by hail, according to a passenger and the airline.

Flight UA349 left Chicago just before 2 p.m. and made a loop over Lake Michigan before abruptly returning to O'Hare International Airport, according to data from tracking site Flight Radar 24.

Alex Lang, a passenger on the flight, tweeted a photo of the front windshield of the airliner, an Airbus A320, showing it cracked on its left side.

"We flew through a hailstorm for some reason and it cracked the entire windshield," he tweeted.

@united My UA349 flight literally just had to emergency land because we flew through a hailstorm for some reason and it cracked the entire windshield... #united#news#emergencylandpic.twitter.com/888ITktU7q

United confirmed that the flight turned back to Chicago "due to severe weather."

The plane landed safely, and passengers were able to start their journey over again on a new plane, the airline said in a statement. United declined to answer questions about the weather or why the pilot might have flown into a storm. It referred questions about the damaged windshield to Airbus.

Lang told Chicago radio station WBBM that the trouble started shortly after takeoff, describing the plane being subject to a four-minute barrage of hail.

"It was loud," he said. "It was just big pieces of hail hitting sheet metal pretty much."

Casey Sullivan, a meteorologist at the National Weather Service's Chicago office, said there were storms across the Lake Michigan region Monday afternoon. The forecasting agency received two reports of one-inch pieces of hail in the region, Sullivan said.

Incidents of planes being damaged by hail are somewhat common. In 2018, an American Airlines jet had to make an emergency landing in El Paso, Texas, after flying into a storm, Reuters reported. A Delta flight was involved in a similar incident in 2015, according to the BBC.