Pilot Rescued After Plane Gets Entangled In High-Voltage Power Lines

"This incident could have been much worse," said Sheriff Luke Hennen. 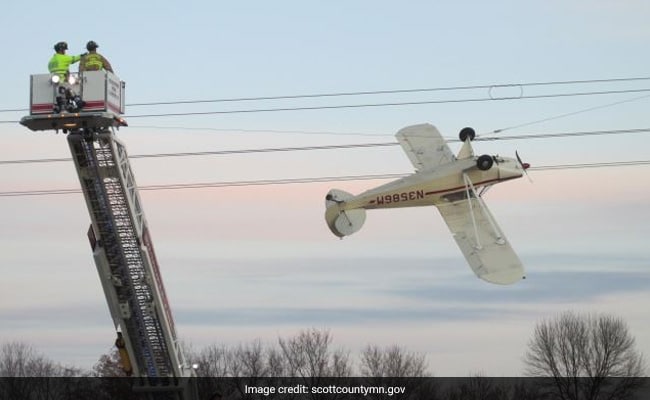 A small plane was left dangling from power cables after crashing in Minnesota.

A pilot was rescued in Minnesota when his plane crashed and got entangled in high-voltage power lines. The single engine plane was flying near Shakopee on Saturday afternoon when it "hit a cluster of power lines and became suspended on a guideline, upside down," a news release from the Scott County Sheriff's Office said.

The pilot of the plane was identified as 65-year-old Thomas Koskovich, who was the only occupant of the aircraft when the crash occurred. Mr Koskovich was rescued from his dangling plane after the power line was de-energized. Along with police officers, a team from Shakopee Fire Department, Allina Ambulance, Minnesota State Patrol, Minnesota Valley Electric Company, and Xcel Energy Company worked to rescue Mr Koskovich.

He was miraculously able to walk away from the accident without any injuries. "This incident could have been much worse," said Sheriff Luke Hennen. "We are grateful the pilot was able to walk away without any injuries."

The Federal Aviation Administration will now investigate the reason for the crash.

In a similar incident in October this year, a pilot and his passenger miraculously escaped unharmed after their plane crashed and got caught up in overhead ski lift cables on its way down.