"They really were very, very lucky. It was a miraculous escape," said a spokesperson of the rescue team for the pilot and his passenger 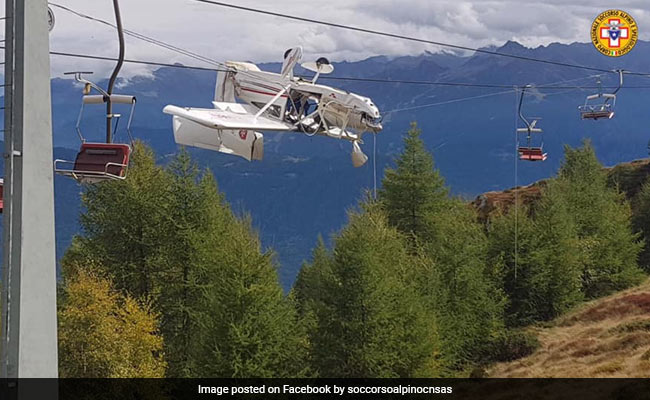 A pilot and his passenger miraculously escaped unharmed after their plane crashed and got caught up in overhead ski lift cables on its way down. Dramatic pictures from the crash in Prato Valentino ski resort in the Italian Alps show the small plane hanging from ski lift cables on Sunday. The photographs were released by Corpo Nazionale Soccorso Alpino e Speleologico (CNSAS), the national cave and mountain rescue unit of Italy.

According to Fox News, the pilot, 62, was thrown from the plane and onto its wing during the crash. One picture, released by CNSAS, shows him sitting on the airplane wing as it hangs a few feet above the ground.

The pilot suffered minor injuries and was taken to a hospital in Sondalo. The plane's only passenger - a 55-year-old tourist from Varese - escaped unharmed.

"They really were very, very lucky. It was a miraculous escape," Walter Milan, a spokesman for the CNSAS, said to Daily Mail. "The plane crashed into the cables but fortunately it became stuck rather than crashing to the ground."

He also added that the rescue mission was a tricky one that lasted an hour and a half. It involved two helicopters and a team of 20 rescue personnel.

"The rescue operation was very tricky. The rescuers had to very carefully manoeuvre along the cables very, very slowly. We didn't want the cables moving any more than necessary," said Mr Milan.

The cause of the crash is being investigated.