The company, Sukhant Funeral Management Private Limited, is based in Mumbai and offers many services. 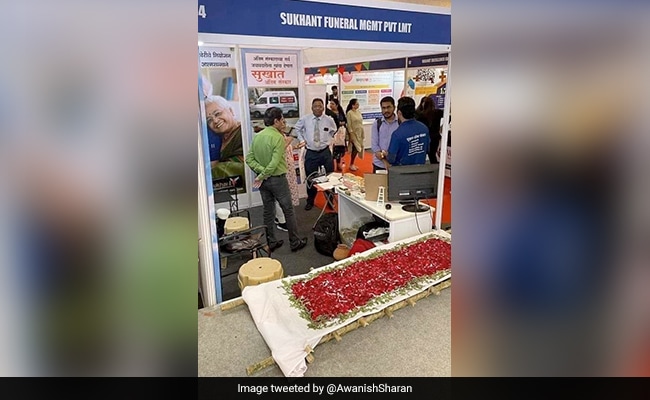 The photo has led to a lot of buzz on social media.

A photo going viral on social media shows a unique 'business model' from a start-up. The company's name, as seen in the photo, is Sukhant Funeral Management Private Limited and it offers funeral service. The photo has been posted by a number of social media users, including Indian Administrative Service (IAS) officer Awanish Sharan. It shows a stall of the company at an event, showcasing its profile. According to its website, the Mumbai-based company "will take care of all post death rituals and responsibilities" to provide relief and a stress-free environment to the grief stricken relatives.

"Why is there a need for such a 'start-up'?" the IAS officer said in his tweet, which has divided the internet.

"Someone from my family once said that in the future, hired people will come in the last journey and their words seem to be coming true. This is a very surprising thing," tweeted one user.

"Funeral service like this is available in the US too. The concept seems to be new for India, that's why people are surprised," said another.

Others pointed out that people are becoming lonely, with no family member to care for them, so they opt for such service.

According to company's website, it arranges for ambulance service, all the items needed for funeral and provides assistance in getting the death certificate.

The representatives of the company present at the kiosk said that their team will take care of the funeral at a fee of around Rs 38,000. They will also help in the immersion of ashes.