Positive and uplifting, the responses will make you smile 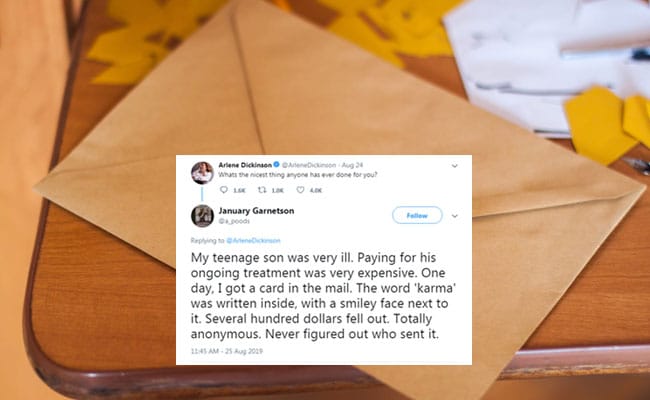 A little bit of kindness can go a long way, as this thread on Twitter reveals. On Saturday, Canadian businesswoman Arlene Dickinson asked Twitter users to share the nicest thing that anyone has ever done for them. Responses flew in quickly as people began to share the sweetest, most considerate things that family members, friends and even complete strangers have done for them. The stories about acts of kindness range from funny to heartwarming and will being a smile to your face.

Whats the nicest thing anyone has ever done for you?

The thread has collected over 1,600 comments and more than 1,000 retweets. Positive and uplifting, the responses make for the perfect antidote to weekday blues.

Take a look at some of the nicest things that people have done for others:

This company paid off their employee's student loans

I got hired by a company that found out I was being hounded by collection agencies for defaulting on a student loan, and they paid it off for me. I had only worked there 4 months, they changed my life.

An anonymous donor helped pay for this Twitter user's son's treatment: "One day, I got a card in the mail. The word 'karma' was written inside, with a smiley face next to it. Several hundred dollars fell out."

My teenage son was very ill. Paying for his ongoing treatment was very expensive. One day, I got a card in the mail. The word 'karma' was written inside, with a smiley face next to it. Several hundred dollars fell out. Totally anonymous. Never figured out who sent it.

A stranger helped a man having a heart attack while driving

I've told this story before, but a stranger saw my dad having a heart attack while driving. Guy jumped in, steered the car off the road and called 911. He then drove the car to the hospital. He saved my dad's life not long after my mom died. I'll never forget that stranger! https://t.co/DOiVRC7KPl

I left my ex & bought a house from a woman who'd gotten divorced under similar circumstances. She asked me what furniture I needed.

I'm an MA student, & I recently ran a Go Fund Me campaign to help send me to the Heterodox Academy conference in NY. I received a large donation from a guy in my hometown who, when I was 11, bullied me and busted up my bike with a few other guys. Here was the message he sent me: https://t.co/ni4r890TaGpic.twitter.com/Hbxt1CFfa7

"I was in tears in the stall in the bathroom at the shopping mall. Someone handed me a two dollar bill under the stall door."

Then, in the new city, working in my dream job, I was in tears in the stall in the bathroom at the shopping mall. Someone handed me a two dollar bill under the stall door. I wasn't in financial need, but that small act of kindness meant so much.

This restaurant owner helped out a starving student.

The toast was half the price of a pot of tea so I was hopeful. The owner went to the back and returned with a bowl full of every food they served and a pot of tea. I wasn't allowed to pay and was told to keep my full stamp card for the next time. They saved me that month. 2/2

What is the nicest thing anyone has ever done for you? Let us know using the comments section.