Orphaned Bear Reunited With Man Who Raised Her In Adorable Video

"He used to have a VERY unique and special relationship with Sonya, and when she was a cub they spent a great deal of time together." 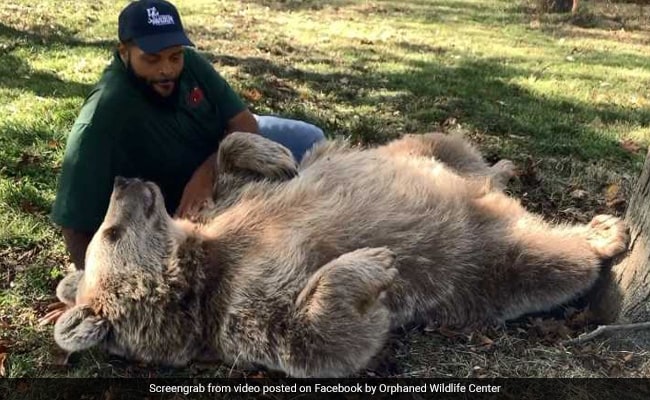 Sonya the bear plays with her caretaker, Jonathan.

Heartwarming videos of a 'beary' sweet reunion are going viral on social media. Sonya the orphaned bear was reunited with the man who cared for her as a cub at a center in Otisville, New York. Videos shared by the Orphaned Wildlife Center show Sonya playing with Jonathan, her former caretaker.

According to the Orphaned Wildlife Center, Sonya has been an orphan for most of her life. When she was a cub, Johnathan used to be one of her caretakers. "He used to have a VERY unique and special relationship with Sonya, and when she was a cub they spent a great deal of time together," the center wrote on Facebook.

They explained that over the years, Sonya did not want to travel any more, and so she stayed at the center and did not see Jonathan for "many, many years".

A series of four videos show their sweet reunion. Not only does Sonya eagerly run up to Jonathan, she also remembers a game they used to play when she was still a cub. Watch them playing it together again below:

In the final video of the series, Sonya lies down to enjoy a belly rub from Jonathan. "You can really see in this one how much she completely trusts him and how comfortable she is. Johnathan says when she was little she would try to climb up under his shirt and snuggle there. He had to tuck his shirt in to try to prevent her from doing it at the size she is now," wrote Orphaned Wildlife Center.

The videos have gone viral since they were shared online about a week ago, collecting hundreds of thousands of views.

"So adorable! It is so awesome that she remembers the game!" wrote one commenter. "This is the cutest thing ever!" said another.