The Saharan cheetah was last seen in the Hoggar Mountains in 2008-10. 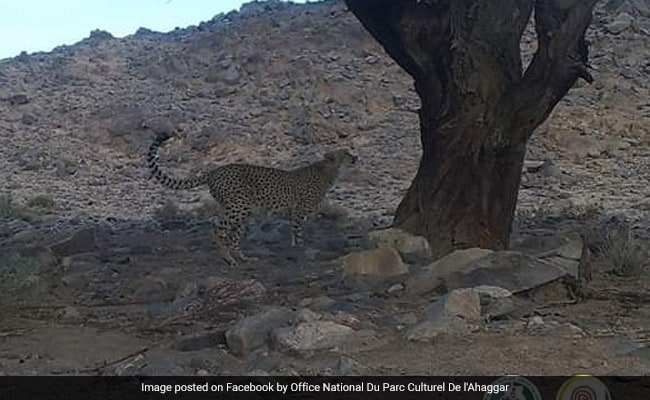 The Saharan cheetah was filmed in Algeria.

Naturalists in Algeria have filmed a Saharan cheetah, a subspecies listed as critically endangered on the IUCN Red List, for the first time in a decade, the national parks authority said. One of the world's most elusive wild cats, the Saharan cheetah is quite different in appearance from the other African cheetahs. Its coat is shorter and paler in colour.

Mr Amokrane was speaking at the release on Monday of a documentary on the work of the park's scientists, which includes images of the cheetah taken in the Atakor volcanic field whose peaks approach a height of 3,000 metres (9,800 feet).

The national park released a photograph of the Saharan cheetah sighting on Facebook:

The sighting, which comes 10 years after the last sighting of this big cat, has created a huge buzz on social media. Indian Forest Services officer Susanta Nanda was among those who took to Twitter to share a photo of the Saharan cheetah. "The most elusive wild cat in the world - the Sahara cheetah - was spotted after a decade in Algeria. Only 37 of them are left in the wild," he wrote while sharing the image. He also shared a photo from another rare sighting - that of snow leopards in Kazakhstan.

The most elusive wild cat in the world-the Sahara Cheetah- was spotted after a decade in Algeria.Only 37 of them are left in the wild.
Snow leopard is difficult to spot in the wild. But it was a surprise when 3 of them were seen at Almaty town of Khazakisthan during lockdown. pic.twitter.com/fKqSNOPZZ3

The Saharan cheetah's range is now limited to isolated pockets across the Sahara and Sahel from Mali in the west to the Central African Republic in the east.

The subspecies was last seen in the Hoggar Mountains in 2008-10 when four individuals were recorded by camera traps.

In 2012, the International Union for Conservation of Nature estimated the remaining population in Algeria at just 37 individuals.