On Camera, Woman's Attempt To Jump Into Pool From Roof Goes Horribly Wrong

11 million views for the video. 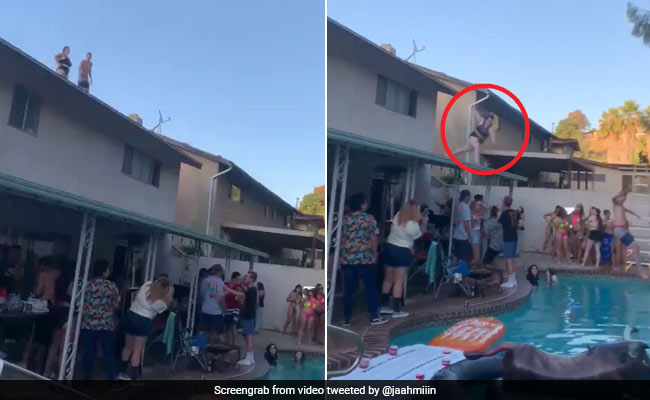 A woman's attempted dive went very wrong when she smashed into a patio shelter.

The terrifying moment that a woman's attempt to jump into a pool from a rooftop went horribly wrong was captured on camera. A video that has gone massively viral online shows the woman attempting to dive into a pool from a height, but stumbling and hitting a patio shelter instead. According to the Daily Mail, the video was filmed during Fourth of July celebrations in the US.

The heart-stopping clip, which also serves as a cautionary tale for amateur daredevils, begins by showing the woman and a man standing on the edge of a roof. While the man manages to pull off a flawless dive into the pool below, the woman stumbles near the edge and falters. Instead of diving straight into the pool, she falls down and smashes into the patio shelter before bouncing off and plunging into water.

The stunt gone wrong elicited gasps of horrors from onlookers at the party, but luckily, the woman - who has not been identified - emerged from the pool apparently unhurt. The clip ends by showing her raising her arms into the air.

According to the Evening Standard, Twitter user Jasmine Rodriguez shared the clip on the microblogging platform and said that the woman was "fine" after the accident.

it got deleted twice on tik tok but.. this was my 4th of July /: pic.twitter.com/1BtEzA0Mtv

The horrifying footage has gone viral with over 11 million views and more than 80,000 retweets and comments.

Many Twitter users condemned the stunt as foolish, while others criticized the onlookers for not bothering to check on the woman after she fell. Several social media users also slammed the partygoers for not maintaining social distance amid the coronavirus pandemic.

"Not one person reacted to her almost breaking her neck but I guess it's too much to expect empathy from people who would have a crowded party in the middle of a pandemic," wrote one Twitter user in the comments section.

"Not one person moved to see if she was OK," another remarked.