The video was shot at Tinku Nallah near Pooh, Himachal Pradesh. 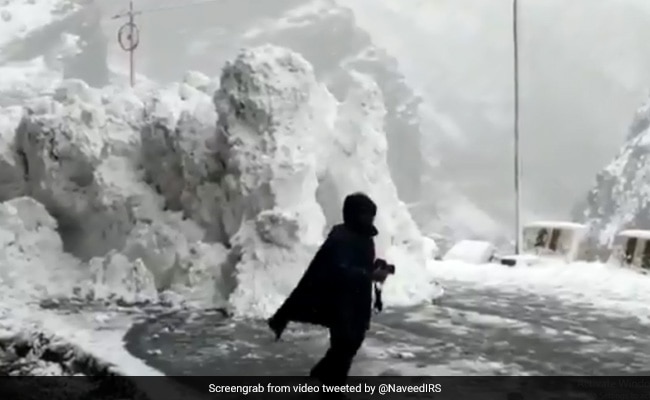 A video shows an avalanche on a road in Himachal Pradesh.

A video that is being widely shared online captures the chilling scene of an avalanche. The dramatic video shows an avalanche sliding down a road in Himachal Pradesh as tourists rush to safety.

The video was shot at Tinku Nallah near Pooh, Himachal Pradesh. It first appeared online in early January, and was posted to Twitter by IRS officer Naveed Trumboo on Monday.

The video begins by showing a huge chunk of snow moving down a road. A few tourists, who were recording the scene on their phones, begin to run as the avalanche continues. "Go back, go back," one man can be heard shouting repeatedly in the video, as some of the tourists climb back into their cars and others continue to film.

"Ever seen the force of a moving glacier in real-time?" asked Mr Trumboo while sharing the chilling video. "#ClimateChange is not a distant reality," he added.

Ever seen the force of a moving glacier in real-time? This is in Tinku nallah near Pooh on NH-5, Kinnaur, HP.. #ClimateChange is not a distant reality. pic.twitter.com/J7ifxaAh1g

The video has been viewed over 76,000 times since it was shared online. It has also collected a ton of comments, some from people disputing Mr Trumboo's claim that the video features a glacier.

"Glaciers are huge and move at a very slow rate...This is not a glacier," wrote one person.

Glaciers are huge and move at a very slow rate. They carry till and deposit over time. This is not a glacier. Glaciers are what developed our landscapes. This is just lots of snow slidding on on a downward slope.

"This is part of an avalanche," said another.

This is not a glacier..this is part of an avalanche that is slipping on road because even road has an ice layer over it & as a result there is poor friction.

Its an Avalanche piling up. Doesnt seems a moving glacier

A number of people also criticised the tourists filming the avalanche from so close.

They don't carve such roads on an active glacier. This is probably an avalanche. Some people here are taking their lives at risk by clicking pictures up so close.😐

Good to see this video. Crazy guys don't have any sense of safety/security. They are busy in recording it from very close.

Avalanches may occur in Kullu, Shimla, Lahaul-Spiti, Kinnaur and Chamba districts till 5 pm on January 12, an SDMA official said.