On Camera: Python Leaps Out Of Water At Lightning Speed To Attack Deer

The video was recorded at Central Chanda Division, Maharashtra. 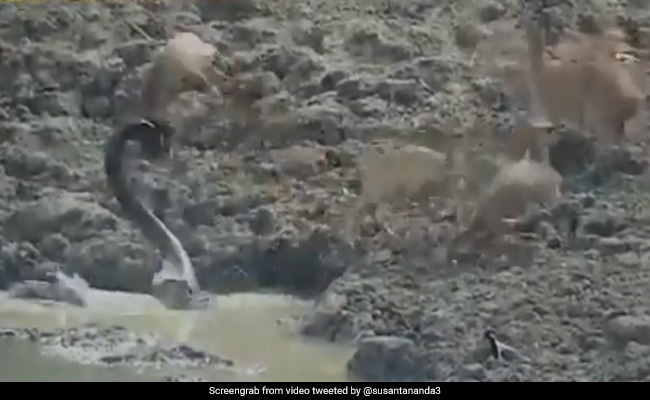 A python was filmed jumping out of water to grab a deer.

Days after a huge python was filmed in a death match with a leopard, a video of another python attacking a deer has emerged online. The video, shared on Twitter by Indian Forest Services officer Susanta Nanda, shows four deer at a watering hole. Second into the video, as the deer drink water, a massive snake leaps out of the pond at lightning speed to grab one of them and pull it into water. The blink-and-you-miss-it moment has left many social media users terrified.

According to Mr Nanda, the video was recorded at Central Chanda Division, Maharashtra. While sharing the video, he explained that pythons kill their prey by jumping and striking them, grabbing them with their teeth.

"When pythons kill prey, they use a kind of ambush technique by jumping & striking the prey, grabbing it with their teeth in around 50 milliseconds only," he wrote while sharing the video. He added, for comparison, that humans take 200 milliseconds to blink an eye.

One of the clip from E surveillance Video of Central Chanda Division from Maharashtra. When pythons kill prey, they use a kind of ambush technique by jumping & striking the prey, grabbing it with their teeth in around 50 milliseconds only. ( Humans take 200ms to blink an eye). pic.twitter.com/e0jPrz1hVx

The video has been viewed over 16,000 times since being posted online on Thursday. Take a look at some of the reactions it has received:

Thanks a lot for sharing this. Nature can be scary and intriguing at the same time.

OMG! Never knew pythons could strike like this!
Scary!

Pythons kill their prey by first grasping it with their sharp teeth and then suffocating it.

In October, a man in Kerala was rescued from the grip of a nearly 10-foot-long python that coiled itself around his neck.