On Camera: Narrow Escape For 3 As Out Of Control Truck Crashes On Icy Road

The video shows the truck flying over the woman, narrowly missing her. 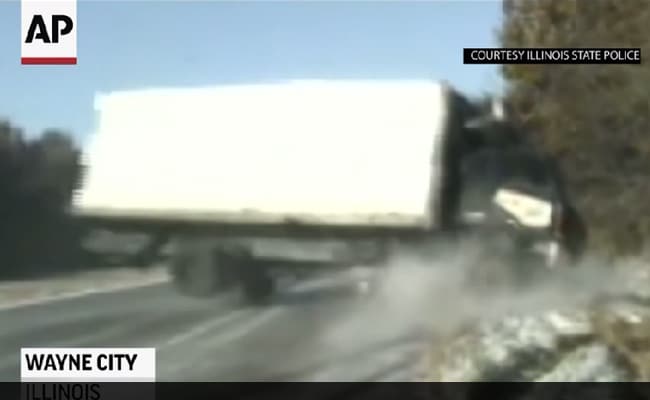 Three people had a narrow escape from an out of control truck.

Police are calling this narrow escape a "miracle on the ice." A heart-stopping video has captured the moment an out of control truck crashed on an icy road, narrowly missing a woman and two troopers in Illinois, USA.

According to news website KSDK, the incident occurred on November 12 along an icy road in southern Illinois. Dashcam footage of the incident shows the two troopers were helping the woman change a flat tyre on the side of the road. As they were busy doing so, the out of control truck slid across the highway and overturned, barreling towards them. The stranded motorist and the troopers dove into a ditch just in time as the truck flew over the woman, missing her by inches.

Footage of the hair-raising incident was released by Illinois State Police as a warning to drivers to slow down, especially while driving on icy roads.

According to WGN9, the woman suffered minor injuries for which she was treated at a hospital and released. The two troopers were not injured.

The driver of the truck was ticketed with failing to slow down.

A video that went viral a few weeks ago showed how a couple pushing their baby in a stroller at a busy intersection had a narrow escape when a speeding Jeep barreled towards them while running a red light.