On Camera, Bull Knocks Man To The Ground, Attacks His Face Before Running Away

Ricky Gervais captioned the clip "Boom!" Shared just a day ago, the video has already garnered over three million views and more than 68,000 likes. 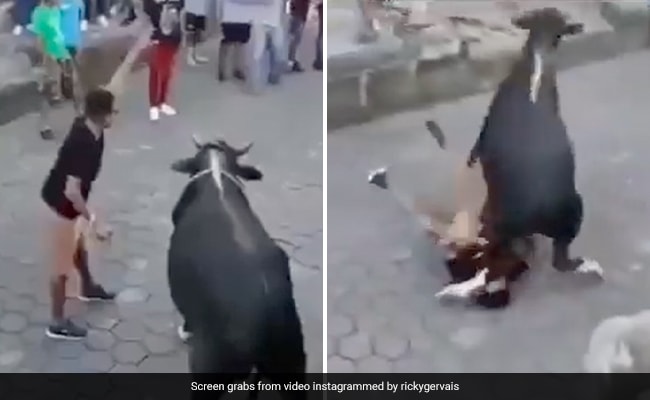 A terrifying video showing a man getting trampled by a bull in the streets in front of onlookers has surfaced online. British comedian and actor Ricky Gervais, who is also known to be a fierce animal rights activist, shared the horrifying clip on Twitter.

In the footage, a man wearing a black t-shirt is seen raising his arm next to the bull's horn. Moments later, the animal is seen abruptly jumping and knocking the man to the ground. The bull then treads on the man's jaw and abdomen before fleeing the scene.

Mr Gervais captioned the clip "Boom!" Shared just a day ago, the video has already garnered over three million views and more than 68,000 likes.

Viral Video | Snake Climbs On Top Of Woman Resting In Field, Video Will Give You Goosebumps

One user wrote, "Not often you actually get to see 'You mess with the bull, you get the horns'". Another said, "It's good for people to see things like this. Even if they have little regard animal rights. Having your head filled-in by a bull, delivers an equally important message."

"It is hard to feel sympathy for someone who gets harmed while trying to cause harm," added third. "Don't pick a fight with anything outside your weight class as a general rule," commented fourth.

Meanwhile, in another similar incident, an elderly man was badly injured after he was tossed in the air by a bull. The horrifying moment was caught on CCTV footage. In the video, the man was seen crossing a street, before a bull charged him from behind and knocked him to the ground.

The incident happened in Haryana's Faridabad earlier this month. The man was admitted to a nearby hospital following the incident.